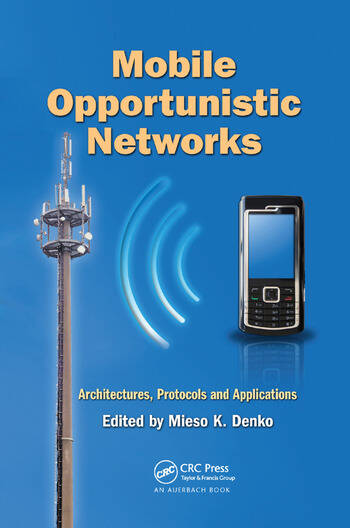 The widespread availability of mobile devices coupled with recent advancements in networking capabilities make opportunistic networks one of the most promising technologies for next-generation mobile applications. Are you ready to make your mark?

Featuring the contributions of prominent researchers from academia and industry, Mobile Opportunistic Networks: Architectures, Protocols and Applications introduces state-of-the-art research findings, technologies, tools, and innovations. From fundamentals to advanced concepts, the book provides the comprehensive technical coverage of this rapidly emerging communications technology you need to make contributions in this area.


Addressing key research challenges and open issues, this complete technical guide reports on the latest advancements in the deployment of stationary relay nodes on vehicular opportunistic networks. It also illustrates the use of the service location and planning (SLP) technique for resource utilization with

Dr. Denko's research interests include wireless networks, mobile and pervasive computing, wireless mesh networks, wireless sensor networks and network security. His research results in these areas have been published international journals, conferences and contributed to books. Dr Denko is a founder/co-founder of a number of ongoing international workshops and symposia. He has served on several international conferences and workshops as general vice-chair, program co-chair/vice-chair, publicity chair and technical program committee member. He has guest co-edited several journal Special Issues in Springer, Wiley, Elsevier and other journals.

Most recently he guest co-edited journal special issues in ACM/Springer Mobile Networks and Applications (MONET) and IEEE Systems Journal (ISJ). Dr Denko has edited/co-edited multiple books in the areas of pervasive and mobile computing, wireless networks and autonomic networks. Most recently he co-edited two books Wireless Quality of Service: Techniques, Standards, and Applications published by Auerbach Publications, September 2008 and Autonomic Computing and Networking published by Springer in June 2009. He is Associate Editor of international journals including the International Journal of Communication Systems (Wiley), the Journal of Ambient Intelligence and Humanized Computing (Springer), and Security and Communication Networks Journal (Wiley). Dr Denko is a senior member of the ACM and IEEE, and the Vice Chair of IFIP WG 6.9.