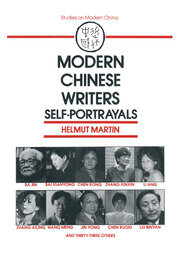 This volume gathers personal reflections on life and literature by 44 of China's leading authors. It aims to illustrate how Chinese society and its creative writing have supported, competed and fought with each other for the past 40 years and more. Much of what is revealed here is mundane, but the pressure of bringing art to social and political causes, indeed the universal pressure to survive, forges this collection into a very human document. The strengths and weaknesses of these essays offer a window on those of modern Chinese literature itself. Realism was the favoured literary doctrine of the day, and, reflecting this, most of these essays speak for themselves - about war, revolution, betrayal and commitment.

As the richest cities in the world's most populous nation, Hong Kong and Shanghai have recently experienced dynamic growth spurred by more and better-managed capital. These cities also have social problems whose solutions will cost money. Their urban populations are aging. Health finance at the level these "First World" cities demand threatens to consume a large portion of the municipal budgets. Eldercare and social security are now less well covered by traditional Chinese families. Education has become more complex and public tuition, where it occurs, brings with it official plans for schools. Immigrants have flocked to Shanghai from inland China, and Hong Kong's border has become a protector of the former colony's high productivity jobs. Housing problems also have deeply affected both cities, albeit in somewhat different ways. This book provides a comprehensive overview of the similarities and differences between social policies in the two cities. Each chapter covers a different issue: health finance, housing, education, labor, poverty and social security, eldercare, and migration and competitiveness. The contributors explore pertinent developments in each city and analyze the similarities and differences between the two cities' approaches to social policies. They focus on policy reform and the interface between social policy and its environment. One main theme throughout the book is the extent to which spending for capital accumulation is in conflict with spending for social policies.