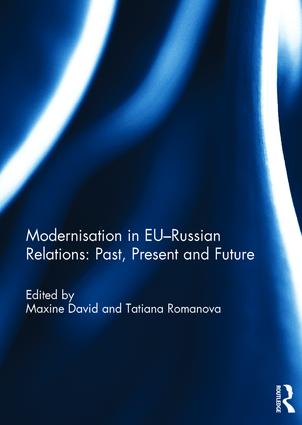 Modernisation in EU-Russian Relations: Past, Present and Future

Written as EU-Russia relations began their swift decline as a result of the Ukrainian crisis, this book examines the nature of these two actors’ relationship in respect of their Partnership for Modernisation. The contributing authors look at modernisation through different lenses applying varying methodologies, delivering: historical analysis, economic analysis, levels-of-analysis debate, which brings along transnational, transgovernmental and intergovernmental relations and interrelations between the EU and its member states, discourse analysis, new institutionalism as well as policy analysis. The authors each identify the importance of modernisation for Russia, demonstrating why, despite the current state of relations between Moscow and Brussels, modernisation remains relevant for EU-Russian relations. At the same time, the plurality of the chapters shows the complexity of the relationship that will have to be taken into account in order to overcome the current crisis and construct sustainable and mutually beneficial relations.

Chapter 2: The Partnership for Modernisation: Contradictions of the Russian Modernisation Agenda Paul Flenley

Chapter 4: The Partnership for Modernisation through the Three Level-of-Analysis Perspectives Tatiana Romanova

Maxine David is Lecturer in European Studies at the University of Surrey. She is a Foreign Policy analyst, specialising in the EU and Russia. She is one of the editors of and a contributing author to National Perspectives on Russia: European Foreign Policy in the Making? (Routledge; 2013). She has also published on gender and the European Neighbourhood Policy and is currently writing a monograph on Putin’s foreign policy through the lens of the agency-structure debate. Maxine is alsoEditor of the Journal of Contemporary European Research.

is an associate professor at St Petersburg State University, she holds a Jean Monnet Chair and runs the Jean Monnet Centre of Excellence there. She was one of three editors for an edited collection on EU-Russian relations, bringing together Russian and Polish perspectives on various aspects of these relations (EU-Russian Relations; 2012)) and has authored multiple articles and book chapters on EU-Russian relations, including economic cooperation, legal approximation, modernisation, the energy dialogue and restrictive measures.