Money and the Church in Medieval Europe, 1000-1200
Practice, Morality and Thought 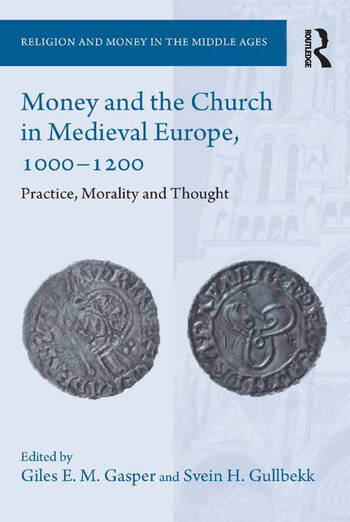 Money and the Church in Medieval Europe, 1000-1200: Practice, Morality and Thought

Bringing together essays from experts in a variety of disciplines, this collection explores two of the most important facets of life within the medieval Europe: money and the church. By focusing on the interactions between these subjects, the volume addresses four key themes. Firstly it offers new perspectives on the role of churchmen in providing conceptual frameworks, from outright condemnation, to sophisticated economic theory, for the use and purpose of money within medieval society. Secondly it discusses the dichotomy of money for the church and its officers: on one hand voices emphasise the moral difficulties in engaging with money, on the other the reality of the ubiquitous use of money in the church at all levels and in places within Christendom. Thirdly it places in dialogue interdisciplinary perspectives and approaches, and evidence from philosophy, history, literature and material culture, to the issues of money and church. Lastly, the volume provides new perspectives on the role of the church in the process of monetization in the High Middle Ages. Concentrating on northern Europe, from the early eleventh century to the beginning of the thirteenth century, the collection is able to explore the profound changes in the use of money and the rise of a money-economy that this period and region witnessed. By adopting a multi-disciplinary approach, the collection challenges current understanding of how money was perceived, understood and used by medieval clergy in a range of different contexts. It furthermore provides wide-ranging contributions to the broader economic and ethical issues of the period, demonstrating how the church became a major force in the process of monetization.

Part 1 Attitudes to Money within the Church: Turpe lucrum? Wealth, money and coinage in the Millennial Church

Nummus falsus: the perception of counterfeit money in the 11th and early 12th century

A herald of scholasticism: Alan of Lille on economic virtues

The Use of Money by the Church: Financing cathedral-building in the Middle Ages: the 11th to 13th centuries

The Church and money in 12th century England

The Church and monetization in early medieval Denmark, c. 1060-1160

The Church, markets and money in early medieval England

Saints, sinners and ... a cow: offerings, alms and tokens of memory

The Church and money in Norway c. 1050-1250: salvation and monetisation

Giles E.M. Gasper is a Senior Lecturer in Medieval History within the Department of History at Durham University, UK.

Professor Svein H. Gullbekk is Professor in Numismatics and History of Money at the Department of Ethnography, Numismatics and Classical Archaeology at the Museum of Cultural History, University of Oslo, Norway.

'[This] book does an excellent job of picking apart the many interconnections between money and religion in the period, and its most valuable contribution is to show the fallacy of viewing the Church as monolithic in this regard. There was no single, offical 'Church attitude' to money; practices and viewpoints were malleable depending on circumstance, which the wide-ranging case studies offered [in this volume] highlight well.' - Aleksandra McClain, The Journal for the Society of Medieval Archaeology.

'We have come a long way in the last half-century in our understanding of the Church's involvement in and influence on medieval economic life and thought. The thirteen essays in this volume present excellent examples of this sophisticated understanding.' - Joel Kaye, The Catholic Historical Review.

'In highlighting how economic concerns were never entirely divorced from moral and spiritual ones this volume provides new insights into the problems and dilemmas that medieval people faced when dealing with money.' - Pamela Nightingale, Economic History Review.