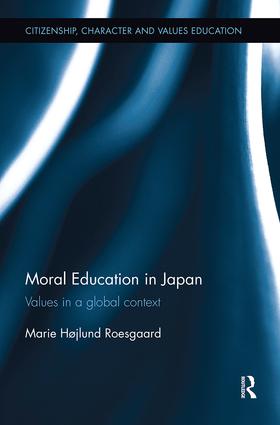 Japan’s Fundamental Law on Education was revised in 2006 and new curriculum guidelines along with new proposals for strengthening the position of moral education reflect the increased political focus, particularly by the two Abe-administrations. Changes include increased emphasis on patriotism, on respect for life and the environment, on individual responsibility, on respecting differences and other countries and on a general strengthening of moral values. This volume describes the history of moral education in Japan, analyses recent changes in curriculum and practices, and takes a closer look at examples of official, semi-official and local discourses on moral education and values. The analysis covers policy statements, teaching material and research, Japanese as well as Western. Using theories of globalization, cosmopolitanism and universal human values it is the intention, by using an Asian example, to illustrate and elaborate upon existing discourses within theories of globalization and cosmopolitanism as well as in education and values and citizenship studies.

This book will be of interest to scholars specializing in education in Japan, and scholars in the academic field of moral, character and citizenship education.

3. A History of Moral Education in Japan

4. Revision of the Fundamental Law on Education in 2006 and Beyond: New Guidelines and New Policies

5. Official and semi-official bids for contents of moral education

6. Moral education in practice – some cases

8. Conclusions: Moral Education as a Gate-Keeper in a globalized world

Marie Hoejlund Roesgaard is Associate Professor at the Department of Cross-Cultural and Regional Studies, University of Copenhagen.