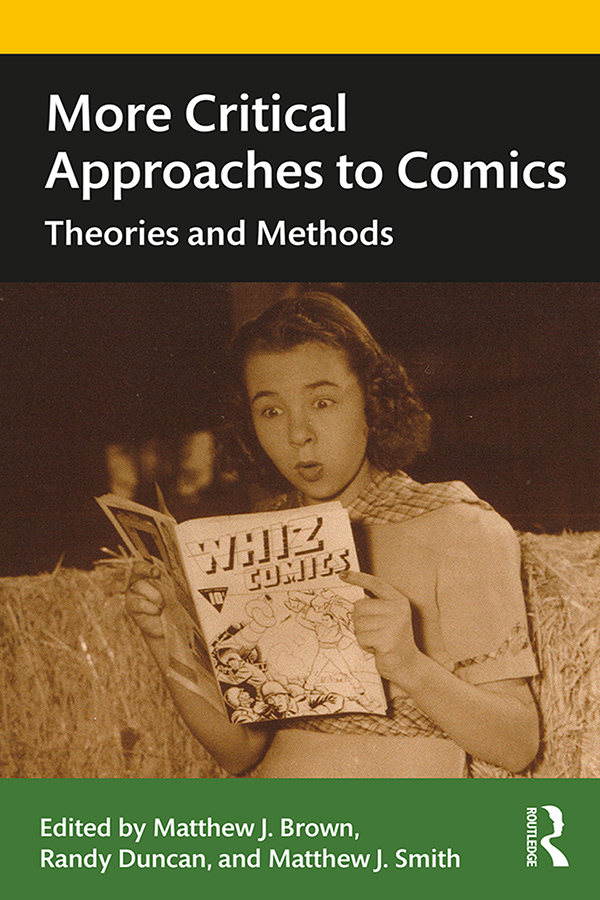 Each chapter explains and then demonstrates a critical method or approach, which students can then apply to interrogate and critique the meanings and forms of comic books, graphic novels, and other sequential art. Contributors introduce a wide range of critical perspectives on comics, including disability studies, parasocial relationships, scientific humanities, queer theory, linguistics, critical geography, philosophical aesthetics, historiography, and much more.

Matthew J. Brown, Ph.D., is Director of the Center for Values in Medicine, Science, and Technology and Associate Professor of Philosophy, History of Ideas, and Humanities at the University of Texas at Dallas. Since 2008, he has run the Comics and Popular Arts Conference, an annual, peer-reviewed, academic conference on comics and pop culture studies that takes place in Atlanta annually on Labor Day Weekend. He teaches Comics Studies in the Humanities Ph.D. program at the University of Texas at Dallas.

Randy Duncan, Ph.D., is Professor of Communication and Director of the Comics Studies Program at Henderson State University. He is co-author of the widely used textbook The Power of Comics: History, Form and Culture (2015) and co-author of Creating Comics as Journalism, Memoir and Nonfiction (2015). Dr. Duncan is co-founder, with Peter Coogan, of the Comics Arts Conference, held each summer in San Diego. In 2009 Duncan received the Inge Award for Outstanding Comics Scholarship and in 2012 he received the Inkpot Award for Achievement in Comics Arts. Duncan and Matthew J. Smith are editors of the Routledge Advances in Comics Studies series.

Matthew J. Smith, Ph.D., is Interim Dean in the College of Humanities and Behavioral Sciences and Professor of Communication at Radford University in Radford, Virginia. He serves in the presidential line of succession for the Comics Studies Society and has co-authored nine books. These include The Secret Origins of Comics Studies (2017) and The Power of Comics: History, Form and Culture (2015). He and Randy Duncan are also co-curators on "Marvel: Universe of Super Heroes," a traveling exhibit that debuted at the Museum of Popular Culture in Seattle in 2018.