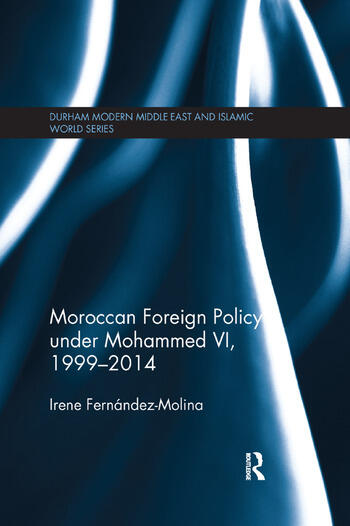 This book presents a comprehensive survey of Moroccan foreign policy since 1999. It considers the objectives, actors and decision-making processes involved, and outlines Morocco's foreign policy activity in key areas such as the international management of the Western Sahara conflict and relations with the other states of North Africa, relations with the European Union, especially France and Spain, and relations with the United States and the Middle East. The book links the behaviour and discourses analysed to differing conceptions of Morocco's national role on the international scene - champion of national territorial integrity, model student of the EU, and good ally of the United States - and shows how these competing approaches to the country's foreign policy enjoy different degrees of domestic consensus, and result in different degrees of legitimation for the regime.

Introduction and analytical framework 1. Objectives, actors and decision-making under Mohammed VI 2. The tribulations of a ‘territorial champion’: the international management of a changing Western Sahara conflict 3. The Sisyphean game of Maghrebi integration and normalisation with Algeria 4. A ‘model student’ in search of a differentiated relationship with the EU 5. Moments of truth and paybacks: from the Advanced Status to the Arab Spring 6. The unbalanced postcolonial triangle with France and Spain 7. An uneasy loyalty: remaining a ‘good ally’ of the United States in times of Middle East turmoil

Irene Fernández-Molina is a Lecturer in Middle East Politics at the University of Exeter, United Kingdom.

"Fernandez-Molina’s book is a well-researched and documented account of the successes and failures of Moroccan foreign policy performance during the last decade and half. Besides the wealth of information contained in each of the seven chapters of the book, the author offers an in-depth investigation of the factors and priorities that govern Moroccan foreign policy decisions and their regional and international repercussions. The book’s exclusive focus on Morocco’s international relations is a good and timely supplement to the considerable scholarship produced on the country’s domestic politics in the aftermath of the Arab Spring. Students of political science and contemporary history with focus on the Middle East and North Africa region will find this book extremely useful."
Karim Bejjit, University of Casablanca

“Contrary to the vast majority of work on the region, which is usually concerned with different aspects of domestic politics, Irene Fernández-Molina prefers to focus on an often-neglected topic, namely foreign policy. The book is a theoretically sound and empirically informed study of Moroccan foreign policy under Mohammed VI. Rather than simply outlining the main foreign policy guiding principles and interests that the Kingdom of Morocco has, the author renders the discussion on Moroccan foreign policy complex by looking also at the domestic impact and role it plays. This, in turn, allows for a better understanding of the distribution of power between different Moroccan domestic institutions. (…) Irene Fernández-Molina’s book contributes to enhancing our knowledge of Morocco through a novel approach, which deserves to be praised. (…) Fernández-Molina’s study should be compulsory reading for anyone interested in Morocco and in understanding the strong dynamics that link foreign policy making with domestic politics."
Francesco Cavatorta, Laval University, Québec

“With this book, Fernández-Molina brings a quasi-exhaustive survey to the current literature. Her work on Mohammed VI’s reign is an essential read in order to understand the process of foreign policy making in Morocco, from the domestic sources of foreign policy to the importance of the construction of a Moroccan identity on the world stage. This well documented empirical study applies Foreign Policy Analysis and merges two main theoretical frameworks: on the one hand, a liberal approach focusing on interactions between state and society in a non-unitarian state perspective, as well as the importance of agencies in the making process, and, on the other hand, a constructivist approach on identity, roles and socialisation processes. (…) This book is the perfect one for any student or academic who wants to fully understand the foreign policy of a fascinating country.”
Louis-Simon Boileau, Sciences Po Paris

"The book takes an innovative approach to foreign policy analysis. Rejecting North–South perspectives that treat post-colonial states as policy objects, this book focuses on what Moroccan foreign policy wants to achieve. (…) Fernández-Molina indirectly contributes to and substantiates post-realist constructivist, critical and post-structuralist analytical perspectives. These consider diplomatic agency as related to and amplified and constituted by the promotion of specific representations of the self: in this case Morocco as a good son of France, model EU student, good US ally, pan-Islamic leader and territorial integrity champion. These images were and remain contradictory, but understanding their effects reveals the extent to which Morocco has been able to wield significant agency by controlling how it is seen. Finally, this volume is part of a growing body of literature that links foreign policy analysis to political identity (…)."