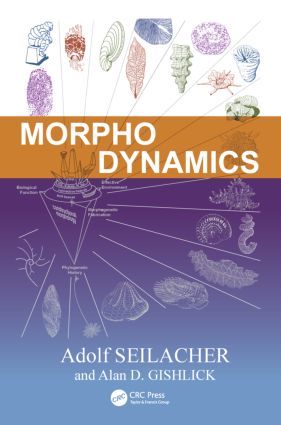 Morphodynamics is defined as the unique interaction among environment, functional morphology, developmental constraints, phylogeny, and time—all of which shape the evolution of life. These fabricational patterns and similarities owe their regularity not to a detailed genetic program, but to extrinsic factors, which may be mechanical, chemical, or biological in nature. These self-organizing mechanisms are the focus of Morphodynamics.

Illustrated by numerous examples from across the biological spectrum, this book embodies the foundation of noted paleontologist Adolf Seilacher’s thinking on the study of morphodynamics. It represents his unique approach of presenting paleontology from an ecological and constructional perspective, rather than a purely taxonomic one.

The hallmark of Seilacher’s storied career has been a constructional and functional focus. He begins by discussing the basic principles—form, pattern formation, ecology and evolution, as well as the factors that override those processes. Next, he examines how morphodynamic principles are implemented in various invertebrates including single-celled protists, Ediacarans, sponges, coelenterates, shelled organisms, worms, arthropods, and echinoderms.

The final chapter explores how morphogenetic principles may apply to clonal colonial organisms. Summarizing seventy years of research into the interactions of form, function, and evolution, the book is copiously illustrated with the author’s own distinctive drawings and an abundance of photos. It provides a framework for readers to pose their own questions and sharpen their interpretive skills on this fascinating topic.

"Life is affected by a careful interplay of a variety of factors including the environment, functional morphology, developmental constraints, and time. This idea, or the study of morphodynamics was originally construed by paleontologist Adolf Seilacher and is clearly introduced in this text book. Morphodynamics allows researchers to view life and living organism from a variety of new angle; for example Seilacher considered the ecological and constructional aspects of paleontology in addition to the taxonomic ones. In this book, Seilacher considers the basic principles of life, including form, evolution and pattern formation, and illustrates how these principles are present in living organisms today. He ends with an exploration of how these principles may have been important in early colonial species."

Patterns of Evolution Versus Counter Evolution

Brachiopods: Bivalved Shells with a Difference

Bivalves I: Constructional and Morphogenetic Principles

Gastropod Heteromorphy: Or How to Get Out of the Spiral Syndrome

Ammonites I: Outer Shell and Jaws

How Valid is the Nautilus Model?

Professor Adolf Seilacher was one of the most influential paleontologists of the latter half of the 20th century.  With a career spanning more than seventy years, he published his first paper in paleontology in 1943 while serving in the German Navy. After the war, he studied in Tübingen under Freiderich von Huene and Otto H. Schindewolf. In the course of his studies of paleontology and evolution, he travelled the world in search of fossils and fossil localities in order to understand the interactions of organisms (both extinct and extant) and their environment.  He taught in Frankfurt, Baghdad, Göttingen, Baltimore, at the University of Tübingen and at Yale University. In 1992, the Swedish academy of Science awarded him the Crafoord Prize, established for scientific disciplines not originally eligible for the Nobel Prize. He was perhaps the world authority on trace fossils and constructional morphology, a field of study he pioneered in the 1970s along with architect Frei Otto. He is also known for work in biostratinomy, the study of exceptional fossil preservation and his iconoclastic interpretation of the Ediacaran biota.

Alan D. Gishlick first met Adolf Seilacher in 1995 as a graduate student at Yale University after completing his undergraduate degree at Augustana College in Illinois. He became interested in Seilacher’s iconoclastic thinking as well as his unique presentation and illustration. Dr. Gishlick has worked for the National Center for Science Education in Oakland, California defending the teaching of evolution in public schools and working to improve the public understanding of science. Subsequently, he has taught at Gustavus Adolphus College in Minnesota; University of Wisconsin-Eau Claire; New York Institute of Technology; and Bloomsburg University of Pennsylvania. He started working with Seilacher on the Morphodynamics project in 2009 and, like many others over the years, got "Dolf’d".