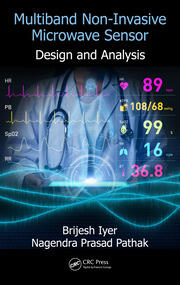 This monograph focuses on the design, implementation and characterization of a concurrent dual band RF sensor for non-invasive detection of human vital signs.

Exclusive title on multiband short range sensors and their biomedical applications, offers detailed analysis of subsystems based on fabricated and measured prototypes and verifies and discusses the system in the real-time environment.

Discusses the practical difficulties of the design process and offers case studies based on the design.

He is recipient of INAE Research fellowship in Engineering for the year 2015-2016. He authored two books and published several papers in the international journals and conferences of repute. His research interest includes the design and development of concurrent multi-band RF circuits and systems for humanitarian applications and allied signal processing and IoT based Sensor design.

Dr Pathak is currently working as Associate Professor in the Department of Electronics & Communication Engineering, Indian Institute of Technology Roorkee, Uttarakhand, India. He has received B. Tech. in Electronics & Telecommunication Engineering and M. Tech. in Electronics Engineering and from University of Allahabad in 1998 and 1996 respectively. He completed his Ph.D. degree in the area of Millimeter-wave Integrated Circuits from Indian Institute of Technology Delhi in 2005. Prior to his current assignment at IIT Roorkee in 2006, he held the position of post doctoral research fellow at ’NRD Super Broadband Research Centre, Tohoku Institute of Technology, Sendai, Japan’, as well as Centre for Applied Research in Electronics (CARE), IIT Delhi. He was invited by Indian National Academy of Engineering (INAE) for delivering invited talk in 9th National Frontiers of Engineering Symposium for Young Indian Engineers held at Jodhpur (June 2015). He is recipient of DST Fast Track Research Grant for Young Scientists (2007), IETE India National Research Fellowship in the area of ’Microwave and Radar Engineering’ (2004, 2005) and DRDO, Government of India, ’Junior Research Fellowship’ in the area of ’Integrated Optics’ in the year of 1999.

Dr Pathak has guided 6 Ph.D. theses and supervised 30 M.Tech dissertations in the area of RF -to- THz Integrated Circuits, Systems & Sensors. He has published more than 110 papers in reputed international journals and conferences and has one US patent to his credit. Dr Pathak’s current research interests are: Linear and Nonlinear integrated circuits and systems at RF to THz frequencies, Non-invasive RF sensors for industrial, defense, civil infrastructure, agriculture and veterinary applications, Intelligent Transportation systems, RF inspired Nanoscale circuits using the concept of Spoof plasmonics/ Graphene plasmonics for RF to THz wireless systems.