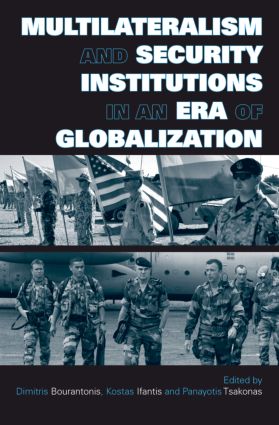 Multilateralism and Security Institutions in an Era of Globalization

Featuring an outstanding international line-up of contributors, this edited volume offers a timely examination of two of the most crucial and controversial issues in international relations, namely the evolution of particular concepts of multilateralism and whether international security institutions are the objects of state choice and/or consequential.

The book combines a variety of theoretical perspectives with detailed empirical examples. The subjects covered include:

This book is a significant contribution to the contemporary debate on multilateralism and the effects of multilateral security institutions and will be of great interest to scholars of international relations and security studies.

'At this critical juncture in history, when the United States has painfully discovered the limits of what it can accomplish unilaterally, the global community is seeking to accommodate a rising China and a resurgent Russia, and the world is beset by international terrorism and civil conflicts, a book on multilateralism and security institutions could not be more timely. To address this important topic, moreover, the editors have assembled a virtual "Who’s Who" of American and European scholarly experts on international institutions and security. Readers will be rewarded with a wealth of insights and provocative arguments.' - John Duffield, Georgia State University, USA

'This rich and timely volume brings together a truly impressive set of contributors on the topic of multilateralism in world politics. Why do states engage in multilateral cooperation? When and how do multilateral institutions matter? For anyone interested in these fundamental questions, Multilateralism and Security Institutions in an Era of Globalization is a must read.' - Jonas Tallberg, Stockholm University, Sweden

'This book is an impressive contribution to two important intersecting literatures: that of the pressing security problems in the age of globalization and terrorism, and that of interactions between global institutions and the main regional security institutions, especially NATO and the EU. The argument is pressed that inter-institutional, as well as multi-state cooperation, are essential in dealing with the dangers which have emerged in the modern world. The authors and editors are distinguished scholars with excellent track records in the chosen areas. The book is essential reading for students of Europe and Atlantic relations and of contemporary security issues.' - Paul Taylor, London School of Economics and Political Science, University of London, UK

Dimitris Bourantonis is an Associate Professor of International Relations at Athens University of Economics and Business. His previous books include The History and Politics of UN Security Council Reform (Routledge, 2006) and The UN’s Role in Nuclear Disarmament Negotiations, (Dartmouth, 1993).

Kostas Ifantis is an Associate Professor of International Relations at the University of Athens, Greece. His books include Turkish-Greek Relations: The Security Dilemma in the Aegean, (Routledge, 2004); International Security Today, (SAM, 2006).

Panayotis Tsakonas is an Assistant Professor of International Relations and Security Studies at the University of the Aegean, Rhodes. His books include A Breakthrough in Greek-Turkish Relations? Understanding Greece’s ‘Socialization Strategy’, (Palgrave-Macmillan, 2007)