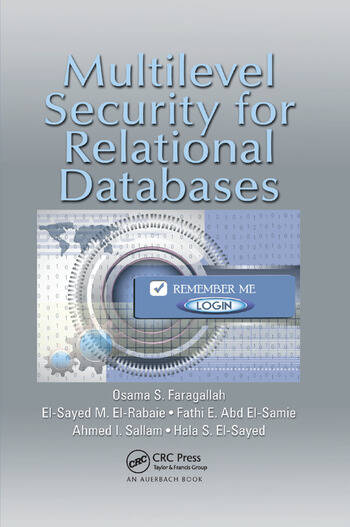 Since databases are the primary repositories of information for today’s organizations and governments, database security has become critically important. Introducing the concept of multilevel security in relational databases, this book provides a comparative study of the various models that support multilevel security policies in the relational database—illustrating the strengths and weaknesses of each model.

Osama S. Faragallah received a B.Sc. (Hons.), M.Sc., and Ph.D. in computer science and engineering from Menoufia University, Egypt, in 1997, 2002, and 2007 respectively. He is currently an associate professor in the Department of Computer Science and Engineering, Faculty of Electronic Engineering, Menoufia University. He was a demonstrator from 1997 to 2002 and has been assistant lecturer from 2002 to 2007. Since 2007 he has been a member of the teaching staff of the Department of Computer Science and Engineering at Menoufia University. He is the co-author of about 100 papers in international journals, conference proceedings, and two textbooks. His current research interests include network security, cryptography, Internet security, multimedia security, image encryption, watermarking, steganography, data hiding, medical image processing, and chaos theory.

El-Sayed M. El-Rabaie (SM’92) was born in Sires Elian, Egypt, in 1953. He received a B.Sc. (Hons.) in radio communications from Tanta University, Tanta, Egypt in 1976, an M.Sc. in communication systems from Menouﬁa University, Menouf, Egypt in 1981, and a Ph.D. in microwave device engineering from Queen’s University of Belfast, Belfast, U.K. in 1986. Until 1989, Dr. El-Rabaie was a postdoctoral fellow in the Department of Electronic Engineering, Queen’s University of Belfast. He was invited to become a research fellow in the College of Engineering and Technology, Northern Arizona University, Flagstaff in 1992, and a visiting professor at the Ecole Polytechnique de Montreal, Montreal, QC, Canada in 1994. He has authored and co-authored of more than 180 papers and 18 textbooks. He has been awarded the Salah Amer Award of Electronics in 1993 and the Best (CAD) Researcher from Menoufia University in 1995. He acts as a reviewer and member of the editorial board for several scientific journals.

Professor El-Rabaie was the head of the Electronic and Communication Engineering Department at Menoufia University; and later the vice dean of postgraduate studies and research. Dr. El-Rabaie’s research interests include CAD of nonlinear microwave circuits, nanotechnology, digital communication systems, and digital image processing. He is a member of the National Electronic and Communication Engineering Promotion Committee and a reviewer of quality assurance and accreditation of Egyptian higher education.

Fathi E. Abd El-Samie received his B.Sc. (Hons.), M.Sc., and Ph.D. from Menoufia University, Menouf, Egypt, in 1998, 2001, and 2005, respectively. Since 2005, he has been a member of the teaching staff in the Department of Electronics and Electrical Communications, Faculty of Electronic Engineering, Menoufia University. He is currently a researcher at KACST-TIC in radio frequency and photonics for the e-Society (RFTONICs). He is a co-author of about 200 papers in international conference proceedings and journals, and 4 textbooks. His current research interests include image enhancement, image restoration, image interpolation, super-resolution reconstruction of images, data hiding, multimedia communications, medical image processing, optical signal processing, and digital communications.

In 2008, Dr. Abd El-Samie was the recipient of the Most Cited Paper Award from the journal Digital Signal Processing.

Ahmed I. Sallam was born in Tanta, Al Gharbia, Egypt in 1982. He received a B.Sc. (Hons.) in computer science and engineering from Al Azhar University, Faculty of Engineering, in 2005 and an M.Sc. in computer science and engineering from Menoufia University, Faculty of Electronic Engineering, Egypt in 2012. He is a senior software engineer at Qarun Petroleum Company. His research interests include database, database security, cryptography, multimedia security, and image encryption.