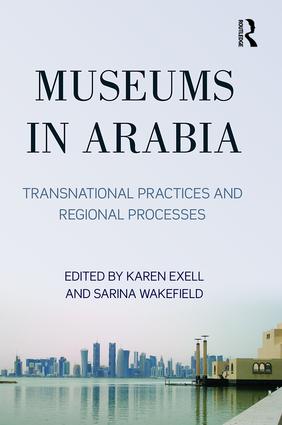 Museum activity has, in recent years, undergone major and rapid development in the Arabian Peninsula, with the regeneration of existing museums as well as the establishment of new ones. Alongside such rapid expansion, questions are inevitably raised as to the new challenges museums face in this region and whether the museum, as a central focus of heritage preservation, also runs the risk of overshadowing local forms of heritage performance and preservation. With contributions from leading academics from a range of disciplines and heritage practitioners with first-hand experience of working in the region, this volume addresses the issues and challenges facing museums in Kuwait, Saudi Arabia, Qatar, Yemen and the UAE. It focuses on the themes of politics, public engagement and the possibility of a new museum paradigm which might appropriately reflect the interests and culture of the region. The interdisciplinary approaches analyse museum development from both an inside and outside perspective, suggesting that museums do not follow a uniform trajectory across the region, but are embedded within each states’ socio-cultural context, individual government agendas and political realities. Including case study analysis, which brings the more marginal nations into the debates, as well as new empirical data and critical evaluation of the role of the museum in the Arabian Peninsula societies, this book adds fresh perspectives to the study of Gulf heritage and museology. It will appeal to regional and international practitioners and academics across the disciplines of museum studies, cultural studies, and anthropology as well as to anyone with an interest in the Gulf and Middle East.

1. Introduction: Questions of Globalisation, Modernity and the Museum in the Arabian Peninsula

3. Staging Identity in a Globalised World

5. Knowledge Production in the Realm of Culture

6. ‘We are not people of the city’: Narratives of Purity and Exclusion

7. Oil, Conflict and Memory in the Arabian Peninsula: Private Collections and Museums

8. ‘… [T]his shifting present which we call the future’

Karen Exell is Honorary Senior Research Associate at UCL Qatar, and a consultant at Qatar Museums. She directed the MA in Museum and Gallery Practice at UCL Qatar from 2011–2015, after teaching museums studies and holding curatorial positions in university museums in the UK for several years. She is currently involved in two QNRF-funded research projects, as a PI on project researching museum pedagogy in Qatar and the region, and as LPI on a project exploring the concept of national identity in relation to the planned new National Museum of Qatar. Her recent publications include the co-edited volumes, Cultural Heritage in the Arabian Peninsula: Debates, Discourses and Practices (Ashgate, 2014) and Museums in Arabia: Transnational Practices and Regional Processes (Ashgate, 2016). Her monograph, Modernity and the Museum in the Arabian Peninsula, will be published by Routledge in 2016.

Sarina Wakefield gained her doctorate from the Open University, UK, which she is currently preparing to turn in to a monograph. Her PhD research analyses the connections and tensions that emerge from combining autochthonous and franchised heritage in Abu Dhabi, UAE, providing a unique window in to the process of creating hybrid heritage in non-western contexts. Her study contributes to new ways of understanding heritage as a process which have been developed within the emerging field of interdisciplinary critical heritage studies. The study explores how transnational heritage contributes to the development of newly emergent cosmopolitan identities. She has lectured at UCL Qatar. She has worked on museum and heritage projects in the UK and Bahrain, and in 2012, she established and co-organised the Museums in Arabia international conference at the British Museum, London. Her publications include ‘Falconry as Heritage in the United Arab Emirates’ in World Archaeology (44, no. 2, 2012); ‘Hybrid Heritage and Cosmopolitanism in the Emirate of Abu Dhabi’ in Reimagining Museums: Practice in the Arabian Peninsula, edited by Pamela Erskine-Loftus (Edinburgh and Boston: MuseumsEtc, 2013).