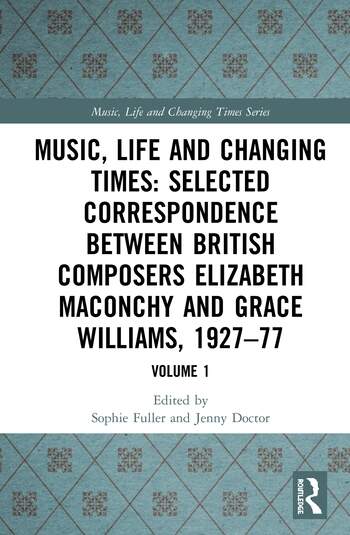 At this book's core is a critical edition of letters exchanged over 50 years between Anglo-Irish composer Elizabeth Maconchy (1907-1994) and the Welsh composer Grace Williams (1906-1977). These two innovative and talented women are highly regarded for their music, their professional activities, and their roles in British musical life. The edition comprises around 353 letters from 1927 to 1977, none of which have been published before, along with scholarly introductions and contextualisation. Interwoven commentaries, in tandem with carefully constructed appendices, frame the letter texts. Moreover, the commentaries and introductory essays highlight and track the development of important themes and issues that characterise the study of twentieth-century British music today. This edition presents a dialogue, through both sides of a unique correspondence, offering an alternative commentary on musical and cultural developments of this period.

is a musicologist intrigued by social aspects of British culture in the twentieth century. After being awarded a Fulbright Grant to the UK in 1989–90, when she was affiliated with the Music Department at King’s College London, she later was affiliated with St Hilda’s College, Oxford, where she archived and catalogued the music manuscripts of Elizabeth Maconchy, which are held in the College Library. She has researched and written on British music and composers of the twentieth century, in particular Benjamin Britten, Elizabeth Maconchy, Grace Williams, Vaughan Williams, and Edward Elgar, often investigating their relationships with the BBC and other sound technologies of their day. Her investigations led to The BBC and Ultra-Modern Music, 1922–36: Shaping a Nation’s Tastes (Cambridge University Press, 1999). With Sir Nicholas Kenyon and David Wright, she co-edited The Proms: A New History (Thames & Hudson, 2007), contributing an essay on the interwar period. More recently, she co-edited with Björn Heile and Peter Elsdon Watching Jazz: Encounters with Jazz on Screen (Oxford University Press, 2013), contributing an essay on jazz on early BBC television. She is currently the Head of the Albino Gorno Memorial Library and Associate Professor of Musicology at the College-Conservatory of Music, University of Cincinnati.

studied music at King’s College London and works at Trinity Laban Conservatoire of Music and Dance. She is the author of The Pandora Guide to Women Composers: Britain and the United States, 1629–Present (1994). Her research interests and writings explore many different aspects of music, gender, and sexuality but focus in particular on musical life in late nineteenth- and twentieth-century Britain. Her work in this area includes essays on the significance of the private musical world in the life and career of Edward Elgar and on women musicians and professionalism in the late-nineteenth and early-twentieth centuries. Together with Phyllis Weliver, she has established the digital resource ‘Sounding Victorian’ (www.soundingvictorian.org).