Music-Making in North-East England during the Eighteenth Century 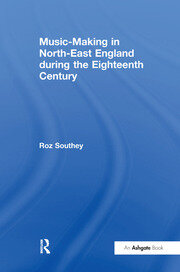 Music-Making in North-East England during the Eighteenth Century

The north-east of England in the eighteenth century was a region where many different kinds of musical activity thrived and where a wide range of documentation survives. Such activities included concert-giving, teaching, tuning and composition, as well as music in the theatre and in church. Dr Roz Southey examines the impulses behind such activities and the meanings that local people found inherent in them. It is evident that music could be perceived or utilized for extremely diverse purposes; as entertainment, as a learned art, as an aid to piety, as a profession, a social facilitator and a support to patriotism and nationalism. Musical societies were established throughout the century, and Southey illustrates the social make-up of the members, as well as the role of Gentlemen Amateurs in the organizing of concerts, and the connections with London and other centres. The book draws upon a rich selection of source material, including local newspapers, council and ecclesiastical records, private papers and diaries and accounts of local tradesman, as well as surviving examples of music composed in the area by Charles Avison, Thomas Ebdon and John Garth of Durham, amongst many others. Charles Avison's importance is focused upon particularly, and his Essay on Musical Expression is considered alongside other contemporary writings of lesser fame. Southey provides a fascinating insight into the type and social class of audiences and their influence on the repertoire performed. The book moves from a consideration of music being used as a 'fashion item', evidenced by the patronage of 'big name' soloists from London and abroad, to fiddlers, ballad singers, music at weddings, funerals, public celebrations, and music for marking the events of the American War of Independence and the French Revolutionary Wars. It can be seen, therefore, that the north east was an area of important musical activity, and that the music was always interwoven into the political, economic, religious and commercial fabric of eighteenth-century life.

Dr Roz Southey is based at the International Centre for Music Studies at the School of Arts & Cultures, University of Newcastle Upon Tyne, UK.

'... a fascinating book... Even if you are not particularly interested in the North-East of England this book is well worth investigating as it adds enormously to our picture of music-making in England; more importantly it tries to examine what was happening in ordinary places away from the glare of celebrity which surrounded such musicians as Handel.' Music Web ’There is much here to command the careful attention of musical and social historians having an interest in the period... a fasinating and informative historical account of a fertile era in the musical life of the nort-east of England; painstakingly researched, engagingly discussed and highly informative in content. It is, moreover, a very significant contributiion to our knowledge of the curltural heritage of the region.' The Consort ’... it will be interesting to compare various parts of the countries if similar books were produced - perhaps to the same excellent model.’ Early Music Review ’This is a thoroughly researched book, bringing together materials that show the patterns of musical life in the north-east...’ NABMSA Newsletter