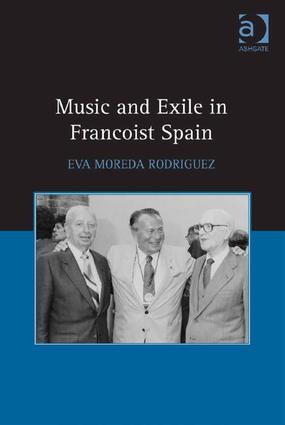 Music and Exile in Francoist Spain

The Spanish Republican exile of 1939 impacted music as much as it did literature and academia, with well-known figures such as Adolfo Salazar and Roberto Gerhard forced to leave Spain. Exile is typically regarded as a discontinuity - an irreparable dissociation between the home country and the host country. Spanish exiled composers, however, were never totally cut off from the musical life of Francoist Spain (1939-1975), be it through private correspondence, public performances of their work, honorary appointments and invitations from Francoist institutions, or a physical return to Spanish soil.

Music and Exile in Francoist Spain analyses the connections of Spanish exiled composers with their homeland throughout 1939-1975. Taking the diversity and heterogeneity of the Spanish Republican exile as its starting point, the volume presents extended comparative case studies in order to broaden and advance current conceptions of, and debates surrounding, exile in musicology and Spanish studies. In doing so, it significantly furthers academic research on individual composers including Salvador Bacarisse, Julian Bautista, Roberto Gerhard, Rodolfo Halffter, Julian Orbon and Adolfo Salazar. As the first English-language monograph to explore the exiled composers from the perspectives of historiography, music criticism, performance and correspondence, Eva Moreda Rodriguez's vivid reconception of the role of place and nation in twentieth-century music history will be of particular interest for scholars of Spanish music, Spanish Republican history, and exile and displacement more broadly.

4 The Hispanic Middle Ages under Francoism and in Exile

Eva Moreda Rodriguez lectures in Music at the University of Glasgow. She specializes in the political and cultural history of Spanish music during the twentieth century, and her work has appeared in leading journals such as Twentieth-century music, Bulletin of Hispanic Studies, Music and Letters and the Journal of the Royal Musical Association, among others.