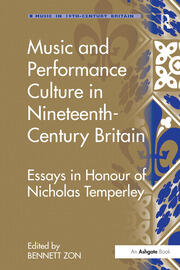 Music and Performance Culture in Nineteenth-Century Britain: Essays in Honour of Nicholas Temperley

Music and Performance Culture in Nineteenth-Century Britain: Essays in Honour of Nicholas Temperley is the first book to focus upon aspects of performance in the broader context of nineteenth-century British musical culture. In four Parts, 'Musical Cultures', 'Societies', 'National Music' and 'Methods', this volume assesses the role music performance plays in articulating significant trends and currents of the cultural life of the period and includes articles on performance and individual instruments; orchestral and choral ensembles; church and synagogue music; music societies; cantatas; vocal albums; the middle-class salon, conducting; church music; and piano pedagogy. An introduction explores Temperley's vast contribution to musicology, highlighting his seminal importance in creating the field of nineteenth-century British music studies, and a bibliography provides an up-to-date list of his publications, including books and monographs, book chapters, journal articles, editions, reviews, critical editions, arrangements and compositions. Fittingly devoted to a significant element in Temperley's research, this book provides scholars of all nineteenth-century musical topics the opportunity to explore the richness of Britain's musical history.

'It is a pleasure to welcome this volume celebrating the career of Nicholas Temperley, the pioneering inspiration for virtually all modern scholarly study of British music... Taken all in all, the richness of this volume, together with the specificity and variety of its research projects into unexplored corners, makes it a fitting tribute to Nicholas Temperley and a highly informative addition to the literature on British music.' North American British Music Studies Association Newsletter 'In short, this volume offers a fitting tribute to the work of Nicholas Temperley and a testimony to what this work served to generate... It is rewarding to see that a clearer picture of history of music and musical activity in Britain is emerging in tandem with an ever more convincing reconstruction of the narrative of its historiography.' Fontes Artis Musicae '... the individual contributions are well wrought and together they make for a very worthwhile book.' Victorian Studies