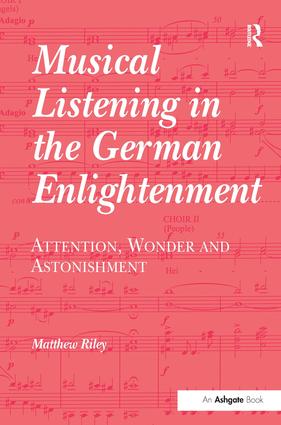 Musical Listening in the German Enlightenment

The silent attentiveness expected of concert audiences is one of the most distinctive characteristics of modern Western musical culture. This is the first book to examine the concept of attention in the history of musical thought and its foundations in the writings of German musical commentators of the late eighteenth century. Those critics explained numerous technical features of the music of their time as devices for arousing, sustaining or otherwise influencing the attention of a listener, citing in illustration works by Gluck, C. P. E. Bach, Georg Benda and others. Two types of attention were identified: the uninterrupted experience of a single emotional state conveyed by a piece of music as a whole, and the fleeting sense of 'wonder' or 'astonishment' induced by a local event in a piece. The relative validity of these two modes was a topic of heated debate in the German Enlightenment, encompassing issues of musical communication, compositional integrity and listener competence. Matthew Riley examines the significant writers on the topic (Descartes, Leibniz, Wolff, Baumgarten, Rousseau, Meier, Sulzer and Forkel) and provides analytical case studies to illustrate how these perceived modes of attention shaped interpretations of music of the period.

'Matthew Riley's book is a major contribution which offers new insights into this hitherto poorly understood period in the history of listening, and provides the tools for further investigation into musical composition, performance and reception… This is an impressive study… Riley is erudite and enlightening and his close readings offer much to the expert reader, but the book as a whole is accessible to the non-expert. Kenner and Liebhaber alike are served well, making this an essential book for anyone interested in 18th-century music aesthetics.' Early Music '… an impressive contribution to the history of music theory and psychology…' Current Musicology 'All scholars interested in the growth of the social and cultural prestige of music in Germany and, further, in expanding their horizons beyond longstanding truisms about Romantic musical thought, will find Michael Riley's clear, well-written, thoughtful, and concise book enriching… a model of clarity and thoroughness…' German Studies Review '… a detailed examination of philosophical and aesthetic theories espoused by Enlightenment thinkers. As such it compliments other scholarly research dealing with eighteenth-century aesthetics… Overall his book is well-researched, finely argued, and clearly written. It will provide readers with much insight into eighteenth-century views on listening and attention and supplement emerging studies on audience behavior.' Music Research Forum Matthew Riley has added considerably to our understanding of eighteenth-century musical thought. His effort to shed light on the importance of Aufmerksamkeit in the writings of Forkel and Sulzer is well-researched and carefully crafted. Ad Parnassum