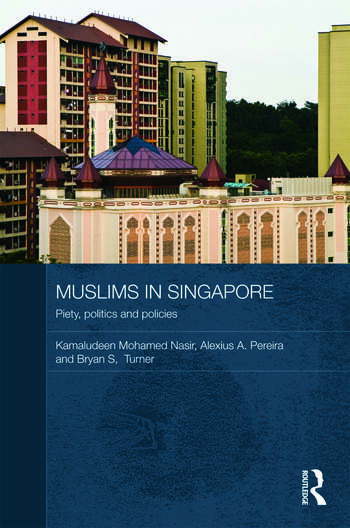 This book examines Muslims in Singapore, analysing their habits, practices and dispositions towards everyday life, and also their role within the broader framework of the secularist Singapore state and the cultural dominance of its Chinese elite, who are predominantly Buddhist and Christian. Singapore has a highly unusual approach to issues of religious diversity and multiculturalism, adopting a policy of deliberately ‘managing religions’ - including Islam - in an attempt to achieve orderly and harmonious relations between different racial and religious groups. This has encompassed implicit and explicit policies of containment and ‘enclavement’ of Muslims, and also the more positive policy of ‘upgrading’ Muslims through paternalist strategies of education, training and improvement, including the modernisation of madrassah education in both content and orientation. This book examines how this system has operated in practice, and evaluates its successes and failures. In particular, it explores the attitudes and reactions of Muslims themselves across all spheres of everyday life, including dining and maintaining halal-vigilance; education and dress code; and practices of courtship, sex and marriage. It also considers the impact of wider international developments, including 9/11, fear of terrorism and the associated stigmatization of Muslims; and developments within Southeast Asia such as the Jemaah Islamiah terrorist attacks and the Islamization of Malaysia and Indonesia. This study has more general implications for political strategies and public policies in multicultural societies that are deeply divided along ethno-religious lines.

Kamaludeen Mohamed Nasir is a PhD candidate at the University of Western Sydney, Australia, and is co-author of Muslims as Minorities: History and Social Realities of Muslims in Singapore (2009, with Syed Muhd Khairudin Aljunied). Alexius A. Pereira is Assistant Professor of the Department of Sociology, National University of Singapore, and is the author of State Collaboration and Development Strategies in China (also published by Routledge). Bryan S. Turner was Professor of sociology in the Asia Research Institute of the National University of Singapore (2005-9), and is currently the Alona Evans Distinguished Visiting Professor of Sociology at Wellesley College, USA, and Director of the Centre for the Study of Contemporary Muslim Societies at the University of Western Sydney Australia. He most recently co-edited Religious Diversity and Civil Society.

At the beginning of the 21st century world-wide religious revivalism and the global war on terror has injected new urgency into long-standing questions regarding state attitudes to the practice of piety among Islamic communities. Employing a theoretically sophisticated framework, this timely book offers a thoughtful case study of the ways in which government management of religious difference has encroached on the lives of Singapore’s Malay Muslims. Informed by an intimate understanding of Singapore society and supported by academic research of high integrity, the analysis gains added authority because of the voices of Muslims themselves are so audible. Muslims in Singapore is a significant contribution not only to Southeast Asian studies but to global conversations regarding the strategies by which states "manage" cultural and religious pluralism.

States that, even quite impartially, seek to institute arrangements embodying secularism and multiculturalism end up paradoxically having not just to maintain the religious and cultural arena from a principled distance but to intrude into it as enforcers. Meanwhile, citizens with a powerful sense of religious and cultural identity will seek, under the protection of multiculturalism or against the tenor of forthright secularism, to assert and display publicly their identity and personal commitment. Proud or defiant, such displays all too easily offend those who hold that any such public affirmation is improper——that one may have any identity that one likes so long as one does not confront others with it in what secular liberals like to see as "neutral" public space. Singapore, and especially its Malay Muslim citizens and their relation to the state, provides an instructive test case for the consideration of these dilemmas. This elegant study not only provides a subtle analysis of Singapore’s management of these issues; it makes Singapore’s experience speak to broad global questions about diversity, identity and liberal belief.

This is a fascinating study of a contemporary multi-faith Asian city state that is both interesting in itself and of much wider relevance. Viewing how Muslims as a minority manage to be devout while fully participating in the benefits of Singaporean economy and society is particularly interesting for Muslim minorities in other advanced societies. Moreover, at a time when states throughout the world have active policies of mangement of religion, to see how Singapore does it is of considerable comparative worth. It not only shows that in an East Asian context secularism does not mean state indifference to religion; it provokes the realisation that secularism does not mean this anywhere. Secularism is the political management of religious people and as such is growing not receding.