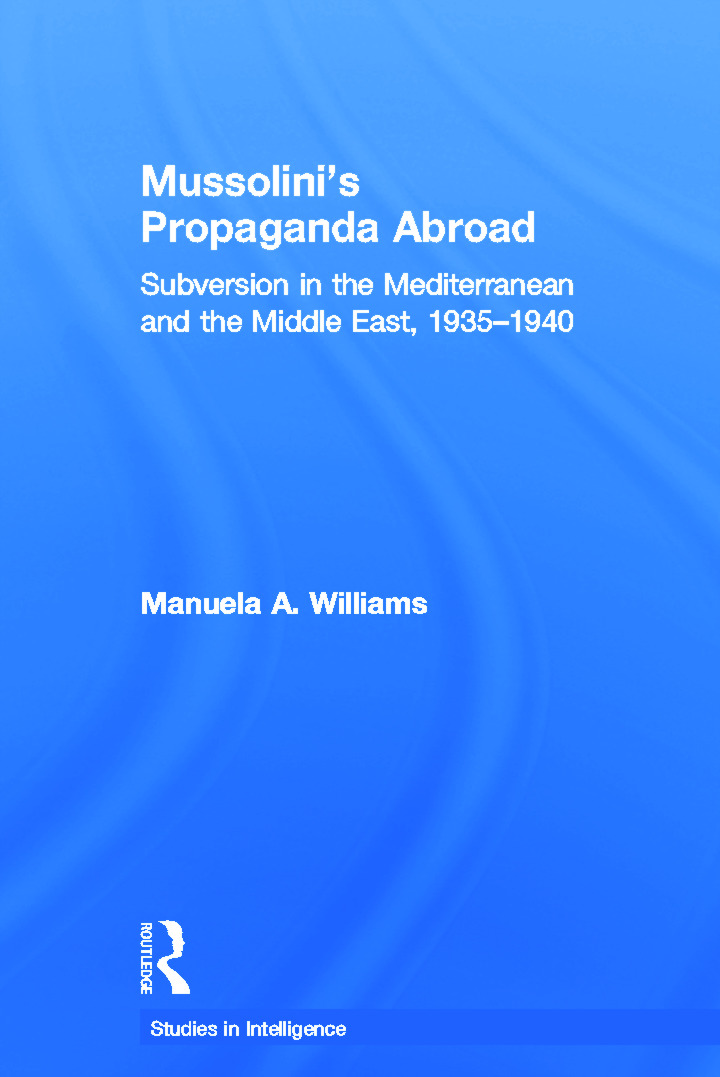 Subversion in the Mediterranean and the Middle East, 1935-1940, 1st Edition

This is the first major study in English of Fascist Italy’s overseas propaganda. Using rare Italian and French captured documents, this is also the first investigation into the relationship between Mussolini’s regime and Arab nationalist movements

This new account covers propaganda and subversive activities engineered by the Italian government in the Mediterranean and the Middle East from 1935 until 1940, when Italy entered the war. It assesses the nature of the challenge brought by the Fascist regime to British security and colonial interests in the region.

Fascist propaganda, in particular in the Arab Middle East, must be regarded as an expression of Mussolini’s foreign policy and his attempts to build an Italian empire that would stretch beyond the Mediterranean, gaining control over the exits, Gibraltar and Suez, which were in the hands of the British and the French.

The activities of individual agents and organizations are carefully reconstructed and analyzed to highlight the seemingly contradictory objectives of the Italian government: on the one hand, Rome was courting the Arab nationalist movements in Egypt and Palestine, which were seeking the support of external forces capable of providing political, financial and military backing needed to overthrow foreign rulers; on the other, the regime was promoting further territorial expansion in Africa. These aspects build into an excellent picture of this fascinating period of modern history.

This book will be of great interest to all students and scholars of politics, media, Italian history and propaganda.

Acknowledgements Abbreviations Introduction Part 1: The Interwar Period 1. The Challenge of Nationalism: Re-structuring the British Empire 2. A European Muslim Power: Italy’s Policies in the Mare Nostrum and the Red Sea 3. Fascist Italy Challenges the Anglo-Saudi Partnership Part 2: Palestine and the Radicalization of Arab Struggle: Italian and German Propaganda, 1935-1940 4. The Origins of the Unrest: The Sale of Land 5. Italian Activities in Palestine: Mussolini, "The Sword of Islam" 6. Nazi Germany in the Middle East: The Auswärtiges Amt and the Palestine Question Part 3: Italian Propaganda in Egypt: Egyptian Politics, Italian Communities and Arab Nationalism 7. Challenging the Old System: Italian Activities in British and French Colonies 8. The "Arabization" of Egyptian Nationalism 9. Structure and Forms of Italian Propaganda Part 4: Defending the Empire: British Imperial Propaganda and Counter-Intelligence, 1936-1940 10. The War of Words: British Cultural Diplomacy and Counter-Propaganda in the Middle East 11. Monitoring the Enemy: British Intelligence and Counter-Intelligence Services in the Interwar Years 12. Mussolini’s Secret Army: Italian Services from the First to the Second World War Conclusion Bibliography Index