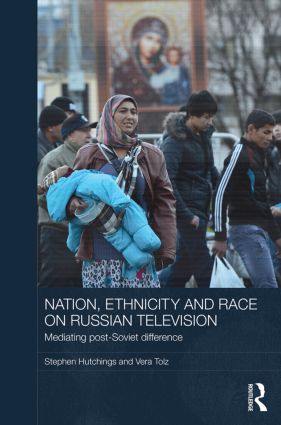 Russia, one of the most ethno-culturally diverse countries in the world, provides a rich case study on how globalisation and associated international trends are disrupting, and causing the radical rethinking of approaches to, inter-ethnic cohesion. The book highlights the importance of television broadcasting in shaping national discourse and the place of ethno-cultural diversity within it. It argues that television’s role here has been reinforced, rather than diminished, by the rise of new media technologies. Through an analysis of a wide range of news and other television programmes, the book shows how the covert meanings of discourse on a particular issue can diverge from the overt significance attributed to it, just as the impact of that discourse may not conform with the original aims of the broadcasters. The book discusses the tension between the imperative to maintain security through centralised government and overall national cohesion that Russia shares with other European states, and the need to remain sensitive to, and to accommodate, the needs and perspectives of ethnic minorities and labour migrants. It compares the increasingly isolationist popular ethnonationalism in Russia, which harks back to "old-fashioned" values, with the similar rise of the Tea Party in the United States and the UK Independence Party in Britain. Throughout, this extremely rich, well-argued book complicates and challenges received wisdom on Russia’s recent descent into authoritarianism. It points to a regime struggling to negotiate the dilemmas it faces, given its Soviet legacy of ethnic particularism, weak civil society, large native Muslim population and overbearing, yet far from entirely effective, state control of the media.

"There is a good deal of important material here…

"Today, the uncertain future of Russia both in the international and domestic arena is pushing the Kremlin to intensify its nation-building in the media. Studying attitudes in TV is thus extremely important, especially when it comes to national identity and national representations. This book goes beyond these representations and explains the patterns behind them, and is therefore an essential read for any scholar interested in the Russian media sphere or nationality issues in contemporary Russia."

"The analysis is sophisticated and multi-faceted, addressing verbal and visual representation, selection, and ordering of material contextualized by a particular channel’s identity…The book is a great resource for scholars in Slavic and Media studies, as well as specialists in social sciences interested in how television reflects and shapes debates about attitudes towards issues of ethnicity, race, and nation-building in contemporary Russia."

"Many of the conclusions Hutchings and Tolz … are backed by exhaustive research, detailed data, and an ongoing engagement with relevant theoretical literature."

Introduction: A Clash of Two Russias, a Tale of Two Cities 1. Television and Nationhood: The Broader Context Part 1 2. Mapping an Uncertain Terrain: An Overview of the Corpus 3. Re-Inventing Russia in Television News Commemorations of the ‘Day of National Unity’: Mediation as Fracture 4. Ethnic Conflict and Television News Coverage of the December 2010 Moscow Riots: Managing the Unexpected Part 2 5. Re-working Russian Diversity: The ‘Marginal’ Role of Television Fiction 6. Transcending Marginality: Ethnicity, Identity and Religion on Vesti-Buriatiia Part 3 7. (Un)covering Alterity: Television, the 2012 Presidential Elections and the Ethnic Underside of Russian Political Discourse 8. An Unholy Scandal: Profanity, Abjection and the Production of Russian-ness in the ‘Punk Prayer’ Affair 9. ‘There is War On Our Streets…’: The ‘National Question’ and Migration on State-aligned Television after the 2012 Presidential Elections Conclusion: Difference in the Balance

Stephen Hutchings is Professor of Russian Studies at the University of Manchester, UK

Vera Tolz is Sir William Mather Professor of Russian Studies at the University of Manchester, UK