Naturalists and Society
The Culture of Natural History in Britain, 1700–1900 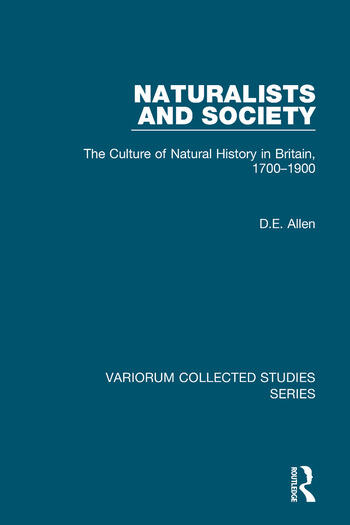 Naturalists and Society: The Culture of Natural History in Britain, 1700–1900

The author's aim in these essays, which complement his pioneering books on natural history, has been to find out more about the different categories of people who engaged in this field in the past, and to piece together how the subject has been shaped by changes in society as a whole. For long the historical study of natural history was neglected, being questionably science as historians of science chose to define that word; David Allen’s work has done much to remedy this. One group of the essays included here seeks to reinterpret and document more fully topics covered in The Naturalist in Britain; others look at crazes that swept society, notably the Victorian mania for fern collecting, and at the biographies of some of the leading naturalists in 18th- and 19th-century Britain.

Contents: Preface; The culture of natural history: Walking the swards: medical education and the rise and spread of the botanical field class; Natural history in Britain in the 18th century; James Edward Smith and the Natural History Society of Edinburgh; Shells, collecting and the Victorians; Tastes and crazes; The Victorian fern craze: pteridomania revisited; Bricks without straw: reconstructing the Botanical Society of London, 1836-1856; The women members of the Botanical Society of London, 1836-1856; The struggle for specialist journals: natural history in the British periodicals market in the first half of the 19th century; The early professionals in British natural history; On parallel lines: natural history and biology from the late Victorian period; The biological societies of London, 1870-1914: their interrelations and their responses to change; Changing attitudes to nature conservation: the botanical perspective; The lost limb: geology and natural history; The natural history society in Britain through the years; Naturalists in Britain: some tasks for the historian; Biography: J.F.M. Dovaston, an overlooked pioneer of field ornithology; The plagiarisms of Thomas Henry Cooper; The botanical family of Samuel Butler; C.C. Babington, Cambridge botany and the taxonomy of British flowering plants; The discoveries of Druce; Index.

' ...anyone interested in eighteenth-and nineteenth-century natural history in Britain will find this volume well worth examining.' Archives of Natural History '... a delightful prose style... will interest anyone seeking to learn more about the culture and practice of natural history...' Journal of the History of Biology '... an excellent selection.' History and Philosophy of the Life Sciences 'In these papers, (...) we see David Allen wrestling with fascinating material, posing (and often answering) excellent questions that those of us involved in history of any science can ponder with profit... a fascinating book by an important historian, from which everyone can expect to get some benefit.' Archives Internationales de l'Histoire des Sciences 'Allen was one of the pioneers of the social history of natural history and of science more generally... Ashgate are to be congratulated for making so many of these essays more readily available to a wider audience.' British Journal for the History of Science