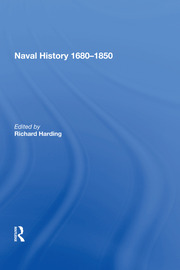 This collection of essays sets out to present a sample of the rich diversity of writings on naval history in this period. The collection covers subjects ranging from strategy, operations and tactics, to administration, technology and the maritime economy. Within this volume the reader will be able to see essays that influenced the development of modern naval history through to samples of some of the latest research.

Contents: Series preface; Introduction; Napoleon and the British Navy after Trafalgar, Julian S. Corbett; Parry of a threat to India, 1768-74, Nicholas Tracy; England versus Spain in America, 1739-48: the Spanish side of the hill, J.C.M. Oglesby; The defence of British trade with the Baltic, 1808-13, A.N. Ryan; Preparing for the Russian war: British strategic planning, March 1853-54, Andrew Lambert: The establishment of the Western Squadron as the lynchpin of British naval strategy, Michael Duffy; Problems of an amphibious power: Britain against France, 1793-1815, Piers Mackesy; Sailors and gentlemen of parade: some professional and technical problems concerning the conduct of combined operations in the 18th century, Richard Harding; Wars, blockade and economic change in Europe, 1792-1815, François Crouzet; The North Sea in wartime, 1688-1713, John Bromley; A means to an end: gunboats and Thomas Jefferson's theory of defense, Gene A. Smith; The French Navy, 1748-63: problems and perspectives, James Pritchard; Bridge and bulwark: the Swedish Navy and the Baltic, 1500-1809, Jan Glete; Selim III and the Ottoman Navy, Stanford J. Shaw; The methodology of British amphibious operations during the Seven Years and American Wars, David Syrett; Image and reality in 18th century naval tactics, N.A.M. Rodger; Responding to the 19th century: the Royal Navy and the introduction of the screw propeller, Andrew D.Lambert; Admiralty relations with the Treasury, 1783-1806: the preparation of naval estimates and the beginnings of Treasury control, P.K. Crimmin; The Earl of Egmont and the Navy, 1763-6, Clive Wilkinson; Financing the French Navy in the Seven Years War: Beaujon, Goosens et compagnie in 1759, J.F. Bosher; Efficiency in dockyard administration 1660-1800: a reassessment, Ann Coats; From shipwright to naval constructor: the professionalization of the 18th century French naval shipbuilders, James Pritchard; Graving docks in France and Spain before 180