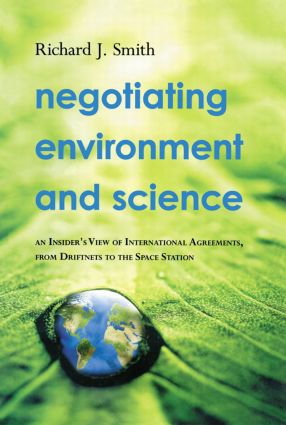 An Insider's View of International Agreements, from Driftnets to the Space Station, 1st Edition

In this thought-provoking new book, career U.S. State Department negotiator Richard J. Smith offers readers unprecedented access to the details about some of the most complex and politically charged international agreements of the late and immediate post Cold War era. During his nine years as Principal Deputy Assistant Secretary in the Bureau of Oceans and International Environmental and Scientific Affairs, Smith led U.S. negotiations on many significant international agreements. In Negotiating Environment and Science, Smith presents first-hand, in-depth accounts of eight of the most high-profile negotiations in which he was directly involved. The negotiations Smith covers are wide-ranging and include the London agreement to amend the Montreal Protocol on Substances that Deplete the Ozone Layer, the international space station agreement, the U.S.-Soviet (eventually, U.S.-Russian) agreement on scientific cooperation, the U.S.-Canada acid rain agreement, the negotiations in Sofia, Bulgaria that established a first link between human rights and the environment, and a contentious confrontation with Japan over driftnet fishing. Smith chronicles the development of these negotiations, the challenges that emerged (as much within the U.S. delegations as with the foreign partners), and the strategies that led to substantive treaties. Smith infuses his narrative with unique historical insight as well as astute observations that can guide U.S. strategies toward productive international agreements in the future. His book also highlights the shift in diplomatic focus over the past 25 years from arms control and other security-related agreements to international and trans-boundary agreements that address global environmental threats and promote cooperative approaches in science and technology. Written for an audience with a general interest in environmental issues as well as international relations, Negotiating Environment and Science will also be an important resource for historians, political scientists, and students in international law and diplomacy.

'This is a wonderfully readable account of lessons learned from eight difficult negotiations…When and if the United States is ready to go beyond the limited climate change understandings reached in Copenhagen last December, lead U.S. negotiator Todd Stern and his colleagues can profit from reviewing Smith's lessons--as, indeed, can all readers with an interest in the increasingly important role that science and environmental negotiations play in the preservation of our planet.' Foreign Service Journal 'A timely and exceedingly relevant contribution to the literature of government and political science. Smith examines, in refreshingly non-academic and jargon-free style, a fascinating new aspect of modern diplomacy.' Richard E. Benedick, author of Ozone Diplomacy 'The book has important insights that deal with the negotiation process and how broader politics impact negotiations. Smith‘s section on Kyoto at the end of the book is right on and should be taken seriously by future negotiators.' Alan D. Hecht, Director for Sustainable Development, U.S. Environmental Protection Agency (EPA) 'An interesting and important book about a topic now on the front burner.' George P. Shultz, former U.S. secretary of state (1982-89) and current distinguished fellow at Stanford University's Hoover Institution 'How do we get agreement on the difficult environmental and scientific challenges the world faces today? This well-written and fascinating account of eight negotiations provides many useful answers.' Joseph S. Nye, Jr., University Distinguished Service Professor, Harvard University, and author of The Powers to Lead 'A powerful pick for any political science or science library.' California Bookwatch

Richard J. Smith was the principal deputy assistant secretary in the Department of State‘s Bureau of Oceans and International Environmental and Scientific Affairs from 1985 to 1994. Following this, he worked for several years on global issues in the National Intelligence Council (NIC). He has received numerous awards including two presidential honors and the State Department's Distinguished Honor Award, as well as several Superior Honor Awards.