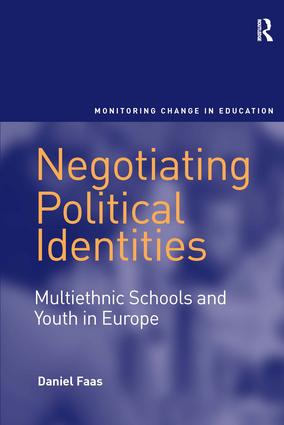 Globalization, European integration, and migration are challenging national identities and changing education across Europe. The nation-state no longer serves as the sole locus of civic participation and identity formation, ceasing to have the influence it once had over the implementation of policies. Drawing on rich empirical data from four schools in Germany and Britain this groundbreaking book is the first study of its kind to examine how schools mediate government policies and create distinct educational contexts to shape youth identity negotiation and integration processes. Negotiating Political Identities will appeal to educationists, sociologists and political scientists whose work concerns issues of migration, identity, citizenship and ethnicity. It will also be an invaluable source of evidence for policymakers and professionals concerned with balancing cultural diversity and social cohesion in such a way as to promote more inclusive citizenship and educational policies in multiethnic, multifaith schools.

Award: Contains extracts of a journal article which was awarded Best Article at the European Sociological Association (ESA) 2009 'This ground breaking book combines an unusually sophisticated theoretical approach with a rich and multi-layered empirical study of the development of ethnic and political identities among Turkish and native youth in four schools in Germany and England. The result is a strong argument that school level policy approaches are very important in influencing how young people categorize themselves. This book should be required reading for anyone interested in migrant integration, multiculturalism, education in Europe and beyond.' Mary C. Waters, Harvard University, USA 'Faas's book makes for fascinating reading not only because of the insights into schools which are furnished, but also because of his critical appraisal of government policies, especially concerning citizenship, which effect institutional discrimination against ethnic minorities…written in a clear, lucid prose and is highly accessible to both the professional and non-professional…' Journal of Contemporary European Studies 'In these detailed accounts of school dynamics, Faas brings young people's perspectives to the fore and highlights the complex negotiation that underpins identity formation. … School dynamics are important, as Faas illustrates so well…' Comparative Education Review