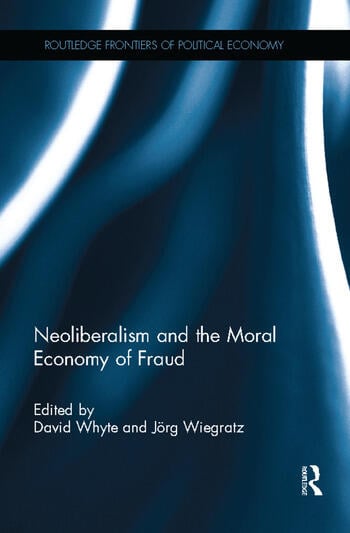 There is evidence that economic fraud has, in recent years, become routine activity in the economies of both high- and low-income countries. Many business sectors in today's global economy are rife with economic crime.

shows how neoliberal policies, reforms, ideas, social relations and practices have engendered a type of sociocultural change across the globe which is facilitating widespread fraud. This book investigates the moral worlds of fraud in different social and geographical settings, and shows how contemporary fraud is not the outcome of just a few ‘bad apples’. Authors from a range of disciplines including sociology, anthropology and political science, social policy and economics, employ case studies from the Global North and Global South to explore how particular values, morals and standards of behaviour rendered dominant by neoliberalism are encouraging the proliferation of fraud.

This book will be indispensable for those who are interested in political economy, development studies, economics, anthropology, sociology and criminology.

'After' the Crisis: morality plays and the renewal of business as usual - Steve Tombs

Do they do evil? The moral economy of tax professionals - John Christensen

Chapter 9: Troika, Austerity and the Reluctant Resort to Criminality in Greece - Steve Hall and Georgios Antonopoulos

Chapter 10: Entrepreneurialism, Corruption and Moral Order in the Criminal Justice System of the Democratic Republic of Congo - Maritza Felices-Luna

Economic freedom mis-sold: neoliberalism and the moral economies of the PPI scandal in the UK - David Ellis

David Whyte is Professor of Socio-legal Studies at the University of Liverpool, UK.

Jörg Wiegratz is Lecturer in Political Economy of Global Development at the University of Leeds, UK.

‘This is a book of rare significance. In the wake of the global financial crisis the debate has rightly shifted from asking merely whether markets are "good" or "bad". Instead, attention has increasingly focused on the factors that propel first the production and then the reproduction of market institutions: put simply, how they work. In Neoliberalism and the Moral Economy of Fraud, the reader is presented with a series of studies that capture the important subset of instances in which modern markets are made through duplicitous practices. Forget the textbook case in which all market participants enjoy formal equality in front of the law. Here you will find empirically-rich descriptions of ways in which market advantage might be sourced through consciously flaunting, bending or even breaking the law. The robust institutional arrangements of the textbook case must therefore be contrasted with the inherent institutional fragility that results whenever fraudulent practices become the established means of playing the game. David Whyte and Jörg Wiegratz are to be congratulated for bringing together such high-quality chapters, each of which subverts the usual notion of how markets are made. This is an excellent volume that provides compelling lessons for how we think about modern economic life.’ — Matthew Watson, Professor of Political Economy, University of Warwick, UK and UK Economic and Social Research Council Professorial Fellow

‘Every human economy has moral as well as legal, political and technological dimensions. In studying their interaction in contemporary capitalism, social scientists have too often neglected moral behaviour. The fact that the contributors to this excellent volume take the high moral aspirations of neoliberalism seriously is what makes their critique so compelling. Case studies from doctors in Kyrgyzstan to justice workers in Congo, and from sweatshops in Argentina to supermarkets in Britain, show how the moral dimension, far from disappearing, becomes more and more significant with the rise of the total market. Fraud and violence are endemic, but more subtle and unexpected forms of malpractice are also carefully documented.’ — Chris Hann, Director, Max Planck Institute for Social Anthropology

‘This is an important and powerful book. International in scope, it outlines in lucid, grounded empirical detail the moral economies of capitalism: how it remakes the soul as well as the economy; how it remakes individual and cultural values as well as politics. The various – and varied – chapters, and the superb introduction and concluding chapters by the editors, show both how neoliberal capitalism is maintained and how its myths and legitimations can be undermined.’ — Laureen Snider, Professor of Sociology (Emerita), Queen's University, Ontario, Canada

‘Whyte and Wiegratz’s new book is to be heartily congratulated for its boldness and ambition in seeking to uncover and explain the very many varieties of fraudulent outcome that neoliberalism is directly responsible for. Across so many occupations, sectors and industries, and in so many countries, the contributors carefully expose how the turn to neoliberalism has created a fantastically criminogenic environment that narrow elites have been able to wilfully exploit to the dis-benefit of the vast majority. The book is especially good at teasing out so many of the fraudulent activities that prevail under cover of "business as usual". It also shows how old moral certainties, civic duties and social obligations have been cast aside or corrupted in so many situations, and new forms of anti-social business behaviour falsely justified so long as the core imperatives of neoliberalism are defended and advanced – privatization, liberalization, marketization, commercialization and minimization (of the state). As an exposition of the multiplicity of fraudulent outcomes and destructive trends catalyzed into existence thanks to the rise of neoliberalism, this book is surely one of the very best. It especially deserves to be read and thoroughly digested by all those with a mission to address fraud, who can now no longer claim in all seriousness not to be aware of its increasingly panoramic extent and its inter-twining with almost all aspects of everyday life.’ — Milford Bateman, Freelance consultant on local economic development, Visiting Professor of Economics, Juraj Dobrila University of Pula, Croatia and Adjunct Professor of Development Studies, St Marys University, Halifax, Canada

‘A most compelling and rewarding account in principle and in practice of the results of the neoliberal moral economy of pursuit of self-interest of the few at the expense of the collective goals of the many.’ — Ben Fine, Professor of Economics, School of Oriental and African Studies, University of London, UK

'This book discloses a hitherto unexplored yet so tenacious dimension of neoliberal capitalism: the structural scale in which neoliberal rationales and norms facilitate, foster and de-criminalise fraudulent economic practices. Well-researched and well written, this rich collection of succinct analyses offers a compelling challenge to individualised notions of fraud and concomitant widespread perceptions of white-collar crime as cases of occasional 'bad apples'. With uncompromising clarity, the book reveals the brutal and corrupt moral economy of various neoliberal settings in both the Global North and South. It targets the active role of the state and points to the class-based nature of those getting away with impunity and those losing out from the regressive transfer of wealth. Neoliberalism and the Moral Economy of Fraud makes a unique contribution by elegantly synthesising the mechanisms of fraud on the basis of the interface between the competitive profit-seeking venture intrinsic to capitalism, and neoliberal prescriptions for a privatised, self-regulated and financialised economy, and particularly its reliance on exploitative and coercive creditor-debtor relationships.' - Angela Wigger, Associate Professor Global Political Economy and International Relations, Radboud University Nijmegen, The Netherlands

'Three very stimulating arguments are at the core of this book and open the door for productive debates and fresh investigations: (a) Fraud is a structural feature of neoliberalism (not only on the margins), and must be explored empirically; (b) Fraudulent practices are neither value-free nor in a desert of norms, but they have their own set of moral and practical norms; (c) Capitalist normative structures not only come from a top-down process, but also from bottom-up dynamics.' — Jean-Pierre Olivier de Sardan, Professor of Anthropology at the Ecole des Hautes Etudes en Sciences Sociales, Marseille, emeritus Director of Research at the Centre National de la Recherche Scientifique, Paris