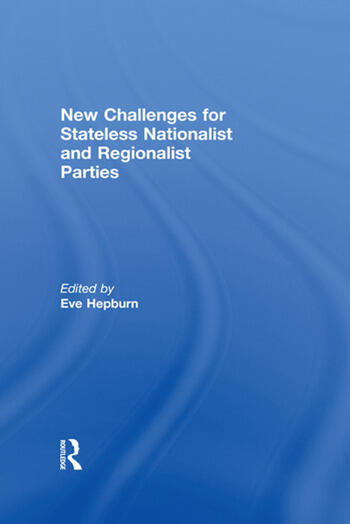 Throughout Europe, stateless nationalist and regionalist parties have moved from ‘niche’ actors in party systems to mainstream political players. No longer the ‘outsider’ in party politics, these parties have successfully entered government at the regional and state levels and many have been responsible for pushing the agenda for radical constitutional change in the United Kingdom, Spain, Italy, Belgium, Germany and France.

However, the transformation of these parties from peripheral movements to established parties of government does not come without its problems. Whilst these parties were once able to focus on the single issue of self-determination, they have been forced to change their strategies, alter their behaviour and compromise on their principles in order to succeed in an era of electoral volatility, partisan dealignment and multi-level governance.

This book explores how stateless nationalist and regionalist parties across Western Europe have responded to the twin challenges of multi-level politics (i.e. operating at the regional, state and European levels), and a multi-dimensional policy space, whereby they must articulate policy proposals alongside their territorial demands. Written by leading experts in the field, this is a cutting-edge collection of theoretical, analytical and empirical work on the challenges currently facing nationalist and regionalist parties in Europe.

This book was previously published as a special issue of Regional and Federal Studies.

1. Introduction: Re-conceptualising Sub-state Mobilization Eve Hepburn  2. Explaining Regionalist Party Positioning in a Multidimensional Ideological Space: A Framework for Analysis Emanuele Massetti  3. From Protest to Power: Mapping the Ideological Evolution of Plaid Cymru and the Bloque Nacionalista Galego Anwen Elias  4. The Rise and Fall of the Belgian Regionalist Parties Kris Deschouwer  5. A Regional(ist) Party in Denial? The German PDS and its Arrival in Unified Germany Dan Hough and Michael Koß  6. Explaining Failure: The Highs and Lows of Sardinian Nationalism Eve Hepburn  7. From Social Democracy back to No Ideology? The Scottish National Party and Ideological Change in a Multi-level Electoral Setting Peter Lynch  8. New Research Agendas on Regional Party Competition Charlie Jeffery

Eve Hepburn is Senior Research Fellow in Politics at the University of Edinburgh. Her research explores party responses to multi-level governance, dynamics of regional party systems, and decentralisation in the UK, Italy, Germany, Spain and Canada. She has published widely in the field, and is the author of Using Europe: territorial party strategies in a multi-level system (Manchester University Press, 2010).