New Challenges to Constitutional Adjudication in Europe
A Comparative Perspective 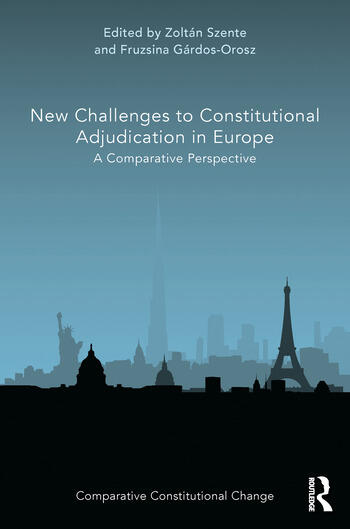 New Challenges to Constitutional Adjudication in Europe: A Comparative Perspective

In the past few years, constitutional courts have been presented with new challenges. The world financial crisis, the new wave of terrorism, mass migration and other country-specific problems have had wide-ranging effects on the old and embedded constitutional standards and judicial constructions. This book examines how, if at all, these unprecedented social, economic and political problems have affected constitutional review in Europe. As the courts’ response must conform with EU law and in some cases international law, analysis extends to the related jurisprudence of the European Court of Justice and the European Court of Human Rights. The collection adopts a common analytical structure to examine how the relevant challenges have been addressed in ten country specific case studies. Alongside these, constitutional experts frame the research within the theoretical understanding of the constitutional difficulties of the day in Europe. Finally, a comparative chapter examines the effects of multilevel constitutionalism and identifies general European trends.

This book will be essential reading for academics and researchers working in the areas of constitutional law, comparative law and jurisprudence.

I. Conceptualizing pressure and change in constitutional adjudication

Chapter 4: Remarks on the case-law of the French Constitutional Council in relation to new challenges - Fabrice Hourquebie

Chapter 5: Beware of disruptions – The Bundesverfassungsgericht as Supporter of Change and Anchor of Stability - Veith Mehde

Chapter 6: From submission to reaction: The Greek Courts’ stance on the financial crisis - Apostolos Vlachogiannis

Chapter 14: New challenges for constitutional adjudication in Europe: What role could the ‘dialogue of courts’ play? - Tania Groppi

Chapter 16: The crisis, judicial power and EU law: could it have been managed differently by the EU Court of Justice? - Márton Varju

'This book presents a remarkable overview in new developments in constitutional adjudication, a field in permanent evolution and constant pressure from diverging issues, including fundamental rights at a time of growing security concern, legislative reforms under conditions of financial crisis and the extension of supranational law. Covering many relevant controversies, this book invites further research and debate.'

'This timely collection provides specialists and non-specialists alike with a very useful account of how constitutional adjudication across Europe has developed and mutated in different ways to address the many cross-cutting challenges facing Europe at present. With its mixture of framing chapters, country case-studies, and thematic analysis of issues such as 'judicial dialogue' and the role of Europe's international 'constitutional' courts - the European Court of Justice (ECJ) and the European Court of Human Rights (ECtHR) - this book is a must-read for anyone seeking to understand the complexities of the judicial role in addressing serious governance challenges and crises.'