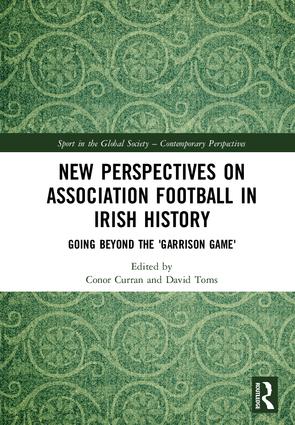 This book assesses association football’s history and development in Ireland from the late 1870s until the early twenty-first century. It focuses on four key themes—soccer’s early development before and after partition, the post-Emergency years, coaching and developing the game, and supporters and governance. In particular, it examines key topics such as the Troubles, Anglo-Irish football relations, the failure of a professional structure in the Republic and Northern Ireland, national and regional identity, relationships with other sports, class, economics and gender. It features contributions from some of today’s leading academic writers on the history of Irish soccer while the views of a number of pre-eminent sociologists and economists specialising in the game’s development are also offered. It identifies some of the difficulties faced by soccer’s players and administrators in Ireland and challenges the notion that it was a ‘garrison game’ spread mainly by the military and generally only played by those who were not fully committed to the nationalist cause. This is the first edited collection to focus solely on the progress of soccer in Ireland since its introduction and adds to the growing academic historiography of Irish sport and its relationship with politics, culture and society.

The chapters in this book were originally published an a special issue in Soccer & Society.

1. Introduction to ‘going beyond the ‘‘garrison game’’: new perspectives on association football in Irish history’

3. ‘Who were the Shoneens?’: Irish militant nationalists and association football, 1913–1923

4. ‘‘Inciting the roughs of the crowd’: soccer hooliganism in the south of Ireland during the inter-war period,

8. How it all began: the story of women’s soccer in sixties Drogheda

9. The development of schoolboy coaching structures for association football in Ireland, 1945–1995

11. Supporter ownership as a method of football governance: the concept of a Supporters’ Trust and its operation within England and the Republic of Ireland

David Toms is an independent scholar based in Norway. Previously, he taught sports history at University College Cork, Ireland, and his monograph, Soccer in Munster: A Social History, 1877–1937, was published in 2015.

The social, cultural (including media) and political study of sport is an expanding area of scholarship and related research. While this area has been well served by the Sport in the Global Society series, the surge in quality scholarship over the last few years has necessitated the creation of Sport in the Global Society: Contemporary Perspectives. The series will publish the work of leading scholars in fields as diverse as sociology, cultural studies, media studies, gender studies, cultural geography and history, political science and political economy. If the social and cultural study of sport is to receive the scholarly attention and readership it warrants, a cross-disciplinary series dedicated to taking sport beyond the narrow confines of physical education and sport science academic domains is necessary. Sport in the Global Society: Contemporary Perspectives will answer this need.