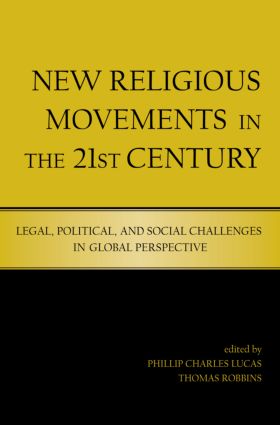 New Religious Movements in the 21st Century is the first volume to examine the urgent and important issues facing new religions in their political, legal and religious contexts in global perspective. With essays from prominent NRM scholars and usefully organized into four regional areas covering Western Europe, Asia, Africa, and Australia, Russia and Eastern Europe, and North and South America, as well as a concluding section on the major themes of globalization and terrorist violence, this book provides invaluable insight into the challenges facing religion in the twenty-first century. An introduction by Tom Robbins provides an overview of the major issues and themes discussed in the book.

"New Religious Movements is a good starting point for a serious student of religion to learn more about the challenges that face emerging faith communities…It is well indexed, and each essay has a good set of endnotes." -- Journal of Church and State

Phillip Lucas is Associate Professor of Religious Studies at Stetson University. He is the author The Oddyssey of a New Religion and Prime Time Religion, with J. Gordon Melton and Jon Stone. He is also the founding editor of the journal iNova Religion. Tom Robbins, an independent scholar, has authored and edited many volumes including Millennium, Messiahs, and Mayhem (Routledge, 1997).