New and Alternative Social Movements in Spain
The Left, Identity and Globalizing Processes 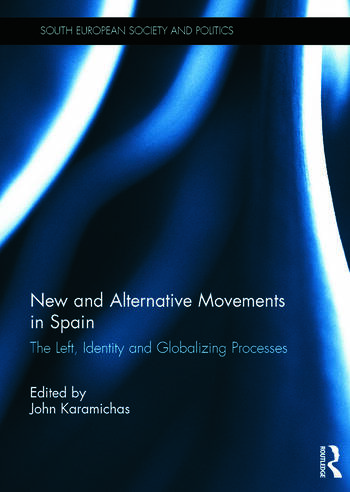 New and Alternative Social Movements in Spain: The Left, Identity and Globalizing Processes

This collection offers a diachronic analytical study of new and alternative social movements in Spain from the democratic transition to the first decade of the 21st century, paying attention to anti-war mobilizations and the use of new technologies as a mobilizing resource. New and alternative social movements are studied through the prism of identified linkages among the left, movement identities and global processes in the Spanish context. Weight is given to certain important historical aspects, like Spain’s relatively recent authoritarian past, and certain value-added factors, such as the weak associationalism and materialism exhibited by the Spanish public. These are complemented by exploring insights offered by key theoretical approaches on social movements (political opportunities structures, resource mobilization). The volume covers established social movement cases (gender, peace, environmental movements) as well as those with a more explicit connection to the current context of global contestation (squatters’ and anti-globalization movements).

1. Key Issues in the Study of New and Alternative Social Movements in Spain: The Left, Identity and Globalizing Processes  2. Sacrifices that Pay: Polity Membership, Political Opportunities and the Recognition of Same-Sex Marriage in Spain  3. Are Gender Equality Institutions the Policy Allies of the Feminist Movement? A Contingent ‘Yes’ in the Spanish Central State  4. Autonomous Movements and the Institutional Left: Two Approaches in Tension in Madrid’s Anti-globalization Network  5. The Environmental Movement in Spain: A Growing Force of Contention  6. The Squatters’ Movement: Urban Counter-Culture and Alter-Globalization Dynamics  7. Mobilizations against the Iraq War in Spain: Background, Participants and Electoral Implications

John Karamichas is lecturer in sociology in the School of Sociology, Social Policy and Social Work at Queen's University of Belfast, UK. His recent publications include, London 2012 and Environmental Sustainability: A Study through the Lens of Environmental Sociology, Sociological Research Online, vol. 18, issue 3; The Olympics and the Environment (2013); Olympic Games, Mega-Events and Civil Societies: Globalization, Environment, Resistance (with Graeme Hayes, 2011).

"New and Alternative Movements in Spain, edited by John Karamichas, is a valuable contribution to the understand-ing of the Spanish case."