Next Level Screenwriting
Insights, Ideas and Inspiration for the Intermediate Screenwriter 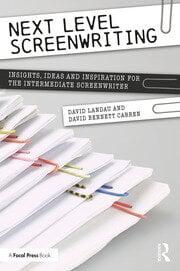 Next Level Screenwriting: Insights, Ideas and Inspiration for the Intermediate Screenwriter

Next Level Screenwriting is an intermediate screenwriting book, for those that have already learned the basics of screenwriting, written a screenplay or two and want to bring their writing and stories to the next level.

Each chapter of the book examines a specific aspect of screenwriting, such as character, dialogue and theme, and then provides the reader with ideas, tips and inspiration to apply to their own writing. Rather than being another “how to” book, this volume features a variety of case studies and challenging exercises throughout – derived from a broad selection of successful feature films and TV shows from the 1940s to the present day – to help spark the imagination of the writer as they work through different styles and approaches of screenwriting.

An absolute must-read for any screenwriter wanting to improve their writing and storytelling skills.

Chapter 1: Don’t be afraid of Genre – keeping your promise to your viewer

Chapter 2: The Write Approach – Finding how to approach telling your story and the
point of attach

Chapter 4: Dialogue that does more than further the plot

Chapter 5: Poetic Description – Writing your settings can be as creative as writing your story

Chapter 6: Finding the Theme – Discovering what your writing is all about

Chapter 9: Based on True Events & Research – Writing the core of the truth without being boring

Chapter 10: Set-up, Pay-off and the Twist – Writing in things that go around and came around

Chapter 11: Writing for a Budget – Writing screenplays under budget constraints

Chapter 12: Rewriting: The Pain and the Gain

Chapter 13: Wrote the Script, Now What?

David Landau is an award-winning screenwriter and playwright with seven plays published and is the author of the books Lighting for Cinematography and Film Noir Production in addition to numerous articles on screenwriting for such magazines as Script, Screenwriter’s Monthly, Student Filmmakers Magazine and HD ProGuide. His feature screenwriting credits include Murder at Café Noir and Dark Tarot. David earned his MFA in Screenwriting from Goddard College and is a full Professor at Fairleigh Dickinson University. He is also a member of the Dramatists Guild and the University Film & Video Association.

is an award-winning screenwriter whose work includes numerous episodes for such television shows as Star Trek: The Next Generation, Stargate SG1, Martial Law, Dennis the Menace, and Teenage Mutant Ninja Turtles among others. His feature films include Mr. Hell and Waiting for Sandoval, and he was the writer/director on the feature film The Red Queen. A member of the Writers Guild of America and the University Film & Video Association, David earned his MFA in Screenwriting from Spalding University and is an Associate Professor at the University of Texas Rio Grande Valley where he is the Interim Chair of the Department of Theatre.

‘Whether you’re writing your first script or your twentieth, this book will help you take your screenplay to the next level. An absorbing read – great examples and explanations from well-known films and television shows, all with practical applications to your own work!’

"David Landau and David Bennett Carren are two professionals who complement the craft of screenwriting with practical experience from the industry trenches. This new book bridges the gap for emerging writers who often find themselves energized to learn beyond formatting basics and struggling to produce quality scripts that hold readers interest. This intermediate level books is ideal for faculty aiming for students to write their first feature length scripts while continuing to develop more imaginative storytelling skills."

"Next Level Screenwriting, by David Landau and David Bennet Carren, is not simply a useful, insightful book. It goes into none of the tropes common to most academic screenwriting works – the three-act structure, the Hero’s Journey, the Rule of Three, how to format – though these are all important points to master, to be sure. But this book doesn’t bother with all that. This book is a User’s Manual.

The focus of this How-To is in the nuts and bolts of crafting a narrative script and getting it into the marketplace. This is done through examples of well-known films and TV shows, analysis of what worked and what didn’t, and why; as well as entertaining anecdotes from the writers’ own careers in the Industry trenches.

The authors cover a dozen areas useful for a journeyman screenwriter to wrestle with – ways to think about a script, ways to deepen it. Right from the start it embraces the notion of genre, the benefits of choosing a good match for the story being told, in order to take advantage of the genre’s established rules – and then how to break those rules when the occasion calls for it.

It ends with a few issues often not covered. First, how to write within a budget – which will inevitably require a rewrite if the writer is lucky enough to get a script produced. This leads to the important lesson of rewriting – the numerous drafts most scripts should go through, to really cut away the dross and end up with the best possible screenplay. Rewriting is a critical skill, and the authors do a great service to address it.

And finally, the book looks at how to turn a script into a movie: what the marketplace is all about, how to break into it, or how to avoid it, if that’s what you want.

This is an engaging, enlightening book – both personable and professional – and I can’t recommend it highly enough for anyone who wants to throw their hat in the ring of fire that is film and television production. Five Stars – and those are Hollywood Stars."