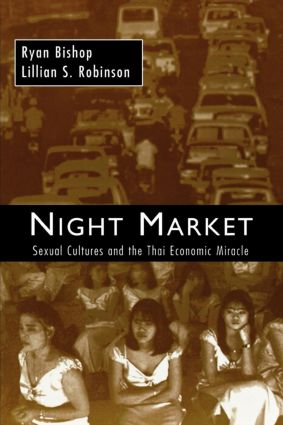 In Thailand, a $4 billion per year tourist industry is the linchpin of the modernization process called the "Thai Economic Miracle". And what is Thailand's main attraction? Sex for hire. Year after year young women are lured to Bangkok to staff the teeming brothels, massage parlors, and sex bars that cater to male tourists from the United States, Western Europe, Japan, Australia, the Gulf States, Malaysia, and Singapore.

Developed from Lillian S. Robinson's article in The Nation, Night Market traces the historical, cultural, material, and textual traditions that have combined in unique ways to establish sex tourism as an integral part of the developing Thai economy. It explores international sex tourism from the perspectives of economic-development planning, forced labor market choices, international sexual alienation, and textual traditions that have constructed sexual "Other" cultures in Western imagination.

"…extremely useful studies in constructing relationships between modernization strategies and sexualities in Southeast Asia and the Pacific. …an excellent analysis of the nexus between Thai economic development, the role of the tourist industry and the concomitant rise of prostitution, particularly among rural women." -- Transformations

"This book's value lies in its resourceful synthesis of the ways that development, modernization and natural resources have combined to reinforce and legitimize cultures that disavow what they themselves produce." -- The Women's Review of Books

"A remarkable collaboration by a pioneer in feminist studies and an anthropologist with deep experience in Thailand that takes the license of cultural studies without its moralisms to produce a cross-culturally sensitive treatment of a subject that otherwise too often takes its place in a latter-day Western cabinet of curiousities." -- George Marcus

"Bishop, a Caucasian anthropologist,…and Robinson, a feminist writer, come at their complex subject from an invigorating variety of angles-historical, economic, psychosexual. They energetically and diligently explore the U.S.'s role in transforming Thailand into an internationally infamous "sexual Disneyland" in the 1970s." -- Publishers Weekly

"…a powerful book that illustrates how the unlikely combination of sexual behavior and economic development on an international scale has had unforseen impact on the Thai nation and its citizens." -- The Lancet

"This detailed account of the sex industry in Thailand shows how Thailand's economic miracle is being paid for by a $4 billion per year tourist industry centering on prostitution. Draws on first-hand encounters with sex workers and clients and tours of hot spots, and discusses issues including AIDS, child prostitution and oppression." -- Book News