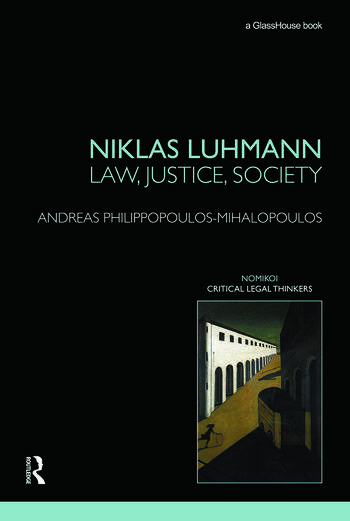 Niklas Luhmann: Law, Justice, Society presents the work of sociologist Niklas Luhmann in a radical new light. Luhmann’s theory is here introduced both in terms of society at large and the legal system specifically, and for the first time, Luhmann’s texts are systematically read together with theoretical insights from post-structuralism, deconstruction, phenomenology, radical ethics, feminism and post-ecologism. In his far-reaching book, Andreas Philippopoulos-Mihalopoulos distances Luhmann’s theory from its misrepresentations as conservative, rigorously positivist and disconnected from empirical reality, and firmly locates it in a sphere of post-ideological jurisprudence.

The book operates both as a detailed explanation of the theory’s concepts and as the locus of a critique which brings forth Luhmann’s radical credentials. The focal points are Luhmann’s concept of society and the law’s paradoxical connection to justice. However, these concepts are also transgressed in order to show how the law deals with the illusion of its identity, and more broadly how the theory itself deals with its limitations. This is illustrated by examples drawn from human rights, constitutional theory and ecological thinking. On the whole, Niklas Luhmann: Law, Justice, Society serves both as an introductory text and as a critical response to Luhmann’s theory, and is recommended reading for students and researchers in sociology, law, social sciences, politics and whoever is interested in seeing the influential work of Niklas Luhmann from a critical new perspective.

Andreas Philippopoulos-Mihalopoulos, LLB, LLM, PhD, is a Reader in Law at the University of Westminster. His research includes critical theory, philosophy, environmental law, European law, law and literature, gender studies and law and art. His edited volume Law and the City and his monograph Absent Environments were published by Routledge in 2007.

"Can theory be critical without being Critical Theory? To probe this question, Andreas Philippopoulos-Mihalopoulos enlists the unlikely suspect Niklas Luhmann. Through detailed aesthetic and philosophical analyses, the author rehabilitates critique as an opening of intellectual distance and dispassionate perspective rather than its more customary role as moral imperative." - Professor William Rasch, Indiana University, Bloomington, author of Niklas Luhmann's Modernity: The Paradoxes of Differentiation

"An original approach in thought and style. The discussion on paradox in the context of postmodernity is fascinating and fundamentally useful. The selection of Luhmann’s citations is impressive. The book works though a dense net of insights which condensate and confirm themselves while being written/read. It is a major achievement to reach this consistency at such a high level of abstraction." - Professor Jean Clam, CNRS, author of Droit et société chez Niklas Luhmann

"This new book on Luhmann by Andreas Philippopoulos-Mihalopoulos is, both for its content and its intellectual self-positioning, an ingenious and very interesting piece of research...the book as a whole is far more adventurous and challenging than its rivals in its interrogation of legal certainties...this is a complex and stimulating book, which certainly deserves a strong recommendation." - Chris Thornhill, Journal of Law and Society, Volume 37 Issue 2, 2010

"[Philippopoulos-Mihalopoulos] has undoubtedly succeeded in reading Luhmann’s theory in an unorthodox critical, radical and even poetic manner." - Jiri Priban, The Modern Law Review, vol. 73 no. 5 (2010)