Ninian Smart on World Religions
Volume 2: Traditions and the Challenges of Modernity 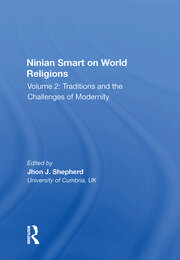 Ninian Smart on World Religions: Volume 2: Traditions and the Challenges of Modernity

Ninian Smart came to public prominence as the founding Professor of the first British university Department of Religious Studies in the late 1960s. His pioneering views on education in religion proved hugely influential at all levels, from primary schools to academic teaching and research. An unending string of publications, many of them accessible to the general public, sustained a reputation that became worldwide. Here, for the first time, a selection of Ninian Smart's wide-ranging writings is organised systematically under a set of categories which both comprehend and also illuminate his varied output over a career spanning half a century. The editor, John Shepherd, was Principal Lecturer in Religion and Philosophy at the University of Cumbria. He first met Smart as a postgraduate student, and recently helped establish the Ninian Smart Archive at the University of Lancaster.

Contents: Preface; Part I Individual Traditions: (i) Buddhism: Mysticism and scripture in Theravada Buddhism; Theravada and processes: Nirvana as a meta-process; The dramatic effect of the Buddha on Western theories of religion. (ii) Hinduism: Indian arguments about the existence of God; The analogy of meaning and the tasks of comparative philosophy; Swami Vivekananda as a philosopher; Integral knowledge and the 4 theories of existence. (iii) Chinese Religions/Worldviews: Reflections on Chinese religious and other worldviews in regard to modernization; Maoism and religion; The bounds of religion and the transition from the Tao to Mao. (iv) Christianity: Myth and transcendence. (v) Islam: Islamic responses to the West; Salman Rushdie in a plural world. (vi) Shamanism: The 21st century and small peoples. (vii) New Religious Movements: Distinctively Californian spiritual movements. Part II Worldview Analysis: Religions in the Modern World: Religion and polity: reflections on the history of religions and the analysis of politics - a question of definition; Religion and nationalism in India and Sri Lanka; Buddhism, Sri Lanka, and the prospects for peace; The importance of diasporas. Part III Christian Theology of Religions and Interfaith Dialogue: Revelation, reason and religions; The relation between Christianity and other great religions; God's body; Soft natural theology Part IV Plurality of Religions: Religious Interpretations: The convergence of religions; A contemplation of absolutes; Models for understanding the relations between religions; Pluralism. Part V Plurality of Religions: Ethico-Political Implications: On knowing what is uncertain; The epistemology of pluralism: the basis of liberal philosophy; Does a universal standard of value need to be higher-order?; Worldview-pluralism: an important paradox and its possible solution. Part VI Conclusion: An ultimate vision. Appendices; Name index.