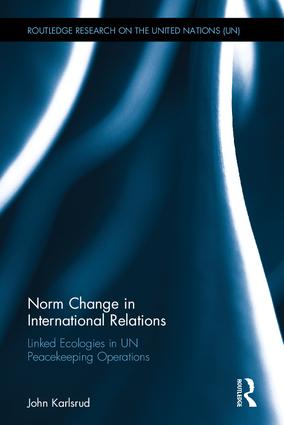 In recent decades there have been several constructivist scholars who have looked at how norms change in international relations. However few have taken a closer look at the particular strategies that are employed to further change, or looked at the common factors that have been in play in these processes. This book seeks to further the debates by looking at both agency and structure in tandem.

It focuses on the practices of linked ecologies (formal or informal alliances),undertaken by individuals who are the constitutive parts of norm change processes and who have moved between international organizations, academic institutions, think tanks, NGOs and member states. The book sheds new light on how norm change comes about, focusing on the practices of individual actors as well as collective ones. The book draws attention to the role of practices in UN peacekeeping missions and how these may create a bottom–up influence on norm change in UN peacekeeping, and the complex interplay between government and UN officials, applied and academic researchers, and civil society activists forming linked ecologies in processes of norm change. With this contribution, the study further expands the understanding of which actors have agency and what sources of authority they draw on in norm change processes in international organizations.

A significant contribution to the study of international organizations and UN peacekeeping, as well as to the broader questions of global norms in IR, this work will be of interest to students and scholars of international relations alike.

‘John Karlsrud - with his insider knowledge - asks and answers the right questions: Why does the UN act the ways it does, and how do those ways of operating become established policy norms? This is an accessible and valuable book’ - Roger Mac Ginty, Professor of Peace and Conflict Studies, University of Manchester, UK

‘John Karlsrud provides a valuable new perspective for understanding and explaining the dynamics of UN peacekeeping missions. Norm Change in International Relations should be read by anyone wishing to understand the evolution of UN peacekeeping practices and how norm change is enacted within international organizations.’ - André Broome, Director of the Centre for the Study of Globalisation and Regionalisation, University of Warwick, UK

‘Where do new peacekeeping norms come from? John Karlsrud’s incisive book shows how senior mission leaders in the field and broader epistemic communities that advocate on peacekeeping issues bring their ideas to the competitive arena of the United Nations, and why certain ideas, including the "responsibility to protect" and the need for "integrated missions," won out in the battle for normative supremacy.’- Paul D. Williams, Elliott School of International Affairs, the George Washington University, USA

"It is by turning to and examining those players, which have been overlooked for such a long time in the context of UN peacekeeping operations, that this book is a welcome contribution to several overlapping bodies of literature dealing with theoretical and substantive issues. It should, furthermore, serve as a useful teaching tool for students looking to deepen their understanding of norm change in the international system. For professionals, this book represents an opportunity to enrich understandings of their own roles in an overwhelmingly influential field. This highly specialized study, with its fine-tuned and tight focus, has extended to the topic of UN peacekeeping missions the attention that it has been deserving of for many years, and is likely to lay the groundwork for future studies for many more."

John Karlsrud is a Senior Research Fellow at the Norwegian Institute of International Affairs (NUPI).