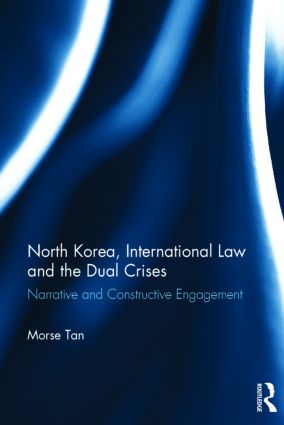 The Democratic People's Republic of Korea (DPRK) has a reputation as one of the worst human rights situations in the world. This book utilizes a unique international law perspective to examine the actions and inactions of North Korea with regard to international security and human rights.

Adopting political, military, historical and legal perspectives, the book explores how the two issues of nuclear weapons and the human rights abuses in North Korea are interconnected, and why the international community should apply the same international law framework to find a solution for both. Drawing on eyewitness accounts, such as refugee and defector testimony, Morse Tan offers a real-life story of North Korea that covers the pertinent law, and constructive approaches of its regime. Tan examines the specific objectives and actions of the North Korean government, and measures these according to international legal obligations such as applicable treaty law, jus cogens norms, and customary international law.

The book concludes by offering solutions for dealing with international security surrounding the Korean Peninsula, and forwards a proposal for the creation of a tribunal to prosecute those at the top of the regime for international crimes and human rights abuses.

As a project exploring the extremes of international law violation, this book will be of great interest and use to readers interested in the history, and political and legal implications of the strategies employed by the North Korea government.

"Professor Tan's research is impressive, given the dearth, if not inaccessibility, of even basic information from such a hermetically closed system…Professor Tan's book offer[s] a wealth of informa…tion and analysis of the world's sovereign outlier…with a straightforward exposition and analysis…His command of the governing international law is clear, as is his ability to marshal cogent facts and political insights…Along with his other writings and public appearances, [the book] clearly establishes his credentials as a well-informed critic of an opaque and puzzling country whose deliberate isolation greatly inhibits useful research of the sort he has admirably undertaken. As a legal scholar, Professor Tan is truly a pioneer." James A.R. Nafziger, Thomas B. Stoel Professor of Law, Director of International Programs, Willamette University College of Law

"Prof. Tan has written a thoroughly documented treatment of the North Korean situation in all of its many dimensions. This is the most comprehensive scholarly book on the subject now and Prof. Tan undoubtedly will gain considerable exposure and prominence… in both the legal and political science academies and in diplomatic and media circles once the book is published…I have to honestly conclude that Prof. Tan covered all of the bases. In fact, I kept anticipating my criticism of his text by wondering whether he would include one point or another, and then within pages he did so. That was extremely pleasing to see him accomplish time and again throughout the text…I looked through the relevant endnotes as well and found them quite impressive…This is a very readable book and it will lead to numerous high-profile opportunities for Prof. Tan, including Congressional testimony and interaction with the United Nations. I strongly endorse the value of its scholarship, its sourcing, and its role in building the foundation…" David Scheffer, Mayer Brown/Robert A. Helman Professor, Director of the Center for International Human Rights, Northwestern University School of Law, and the 1st War Crimes Ambassador in U.S. history

Introduction Section One: The Story of a Criminal Regime 1. War, Incursions and Provocations 2. Multiple Menaces, Including Cyber-Nuclear 3. Hell’s Doorstep 4. The Perils and Hardships of Refugees 5. Jerusalem of the East No More 6. The China-North Korea Connection 7. Iron Fists in a Fog Section Two: Dissecting the Crimes 8. The War That Has Not Ended 9. Nuclear Defiance 10. Prosecuting Hell’s Doorstep 11. The Plight of Those in Flight 12. Provisions for Religious Liberty Section Three: Constructive Approaches and Solutions 13. Judicial Justice 14. Diplomacy With a Criminal Regime 15. China’s Potential to Solve the Puzzle 16. U.S. and UN Remedial Actions 17. International Humanitarian Intervention and the Responsibility to Protect 18. Sundry Solutions and Constructive Approaches 19. Conclusion