Nuclear Disarmament and Non-Proliferation
Towards a Nuclear-Weapon-Free World? 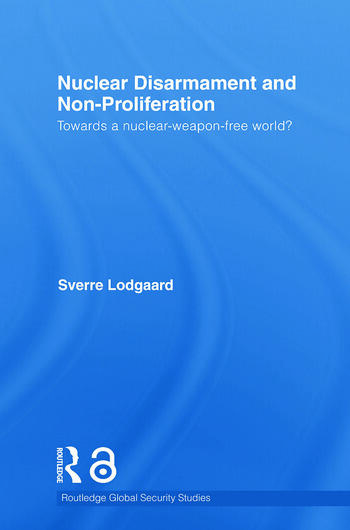 Nuclear Disarmament and Non-Proliferation: Towards a Nuclear-Weapon-Free World?

A PDF version of this book is available for free in open access via www.tandfebooks.com as well as the OAPEN Library platform, www.oapen.org. It has been made available under a Creative Commons Attribution-Non Commercial-No Derivatives 3.0 license and is part of the OAPEN-UK research project.

Discussing the requirements of a new international consensus on nuclear disarmament and non-proliferation, this book builds on the three pillars of the nuclear non-proliferation treaty (NPT): non-proliferation, disarmament and peaceful uses of nuclear energy. It reviews the impact of Cold War and post-Cold War policies on current disarmament initiatives and analyses contemporary proliferation problems: how to deal with the states that never joined the NPT (India, Pakistan and Israel); how states that have been moving toward nuclear weapons have been brought back to non-nuclear-weapon status; and, in particular, how to deal with Iran and North Korea. The analysis centres on the relationship between disarmament and non-proliferation in an increasingly multi-centric world involving China and India as well as the US, the European powers and Russia. It concludes with a description and discussion of three different worlds without nuclear weapons and their implications for nuclear disarmament policies.

This book will be of great interest to all students of arms control, strategic studies, war and conflict studies, and IR/security studies in general

Sverre Lodgaard is a Senior Research Fellow at the Norwegian Institute of International Affairs, Oslo

Part 1: Power Shifts and Nuclear Weapons  1. Power Shifts and Nuclear Weapons  Part 2: The Legacies of Nuclear History and the Requirements of a New Consensus on Non-proliferation and Disarmament  2. The First Nuclear Era  3. Post Cold War doctrines  4. A global consensus on non-proliferation and disarmament  Part 3: Proliferation Problems and the Role of Nuclear Disarmament  5. The Three-State Problem  6. Rollback Experiences  7. The Case of Iran  8. How to Understand North Korea  9. The Relationship Between Disarmament and Non-Proliferation  Part 4: Towards a Nuclear-Weapon-Free World  10. Towards a Nuclear-Weapon-Free World

Sverre Lodgaard is a Senior Research Fellow at the Norwegian Institute of International Affairs, Oslo

'The book should surely interest students and practitioners of international relations, disarmament and nuclear issues, as it provides a clear and broad view of the subject.' - Stefano Felician, The International Spectator, Vol. 46, 3, September 2011