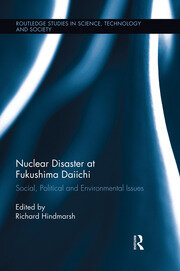 Nuclear Disaster at Fukushima Daiichi is a timely and groundbreaking account of the disturbing landscape of the Fukushima Daiichi nuclear meltdown amidst an earthquake and tsunami on Japan’s northeast coastline on March 11, 2011. It provides riveting insights into the social and political landscape of nuclear power development in Japan, which significantly contributed to the disaster; the flawed disaster management options taken; and the political, technical, and social reactions as the accident unfolded. In doing so, it critically reflects on the implications for managing future nuclear disasters, for effective and responsible regulation and good governance of controversial science and technology, or technoscience, and for the future of nuclear power itself, both in Japan and internationally.

Informed by a leading cast of international scholars in science, technology and society studies, the book is at the forefront of discussing the Fukushima Daiichi disaster at the intersection of social, environmental and energy security and good governance when such issues dominate global agendas for sustainable futures. Its powerful critique of the risks and hazards of nuclear energy alongside poor disaster management is an important counterbalance to the plans for nuclear build as central to sustainable energy in the face of climate change, increasing extreme weather events and environmental problems, and diminishing fossil fuel, peak oil, and rising electricity costs.

Richard Hindmarsh is Associate Professor in the Griffith School of Environment and Centre for Governance and Public Policy, Griffith University, Brisbane, Australia. His field is environmental politics and policy and science, technology and society. He is co-founder of the Asia-Pacific Science, Technology and Society Network. He has produced eight books including Edging towards BioUtopia (2008, U. of Western Australia press), and Genetic Suspects (co-edited with Barbara Prainsack) (Cambridge University Press, 2010). Current research includes GM crops; wind and nuclear energy; governance, and community engagement; and sustainability transitions.

"Nuclear Disaster at Fukushima Daiichi is one of the first and most comprehensive social scientific analyses of the natural and human-made disaster that is Fukushima Daiichi. It brings together some of world’s leading thinkers on science, technology and society, risk analysis, energy policy as well as indigenous Japanese scholars offering an internal critical account of the reasons, actors, dynamics and implications of this disaster. This is a major scholarly contribution to an extremely pressing and urgent issue and Hindmarsh is to be congratulated in bringing together such an impressive array of scholarship in such a short space of time."

"Richard Hindmarsh has added a new dimension to the global policy debate over the safety of nuclear energy. The twelve chapters in the book provide rich sources of information and conceptual agendas. The book will become a ‘must’ for those who want to partake in this ongoing discussion."