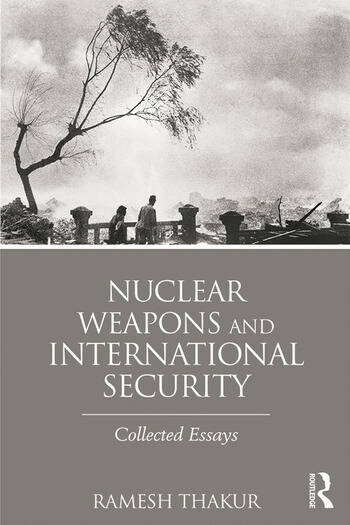 This volume brings together more than three decades of research and writings by Professor Ramesh Thakur on the challenges posed by nuclear weapons.

Following an introduction to the current nuclear state of play, the book addresses the challenge of nuclear weapons in three parts. Part I describes the scholar-practitioner interface in trying to come to grips with this challenge, the main policy impact on security strategy, and the various future nuclear scenarios. Part II addresses regional nuclear challenges from the South Pacific to East, South and West Asia and thereby highlights serious deficiencies in the normative architecture of the nuclear arms control and disarmament regime. In the third and final part, the chapters discuss regional nuclear-weapon-free zones, NPT anomalies (and their implications for the future of the nuclear arms control regime) and, finally, assess the global governance architecture of nuclear security in light of the three Nuclear Security Summits between 2010 and 2014. The concluding chapter argues for moving towards a world of progressively reduced nuclear weapons in numbers, reduced salience of nuclear weapons in national security doctrines and deployments, and, ultimately, a denuclearized world.

This book will be of much interest to students of nuclear proliferation, global governance, international organisations, diplomacy and security studies.

Preface: A Tale from Hiroshima 1. Introduction  PART ONE: THE NUCLEAR DEBATE 2. Nuclear Nonproliferation and Disarmament: Can the Power of Ideas Tame the Power of the State? 3. The Nuclear Debate 4. Envisioning Nuclear Futures  PART TWO: REGIONAL CHALLENGES IN ASIA, THE PACIFIC AND THE MIDDLE EAST 5. The Last Bang Before a Total Ban: French Nuclear Testing in the Pacific 6. The Nuclear Option in India’s Security Policy 7. The South Asian Nuclear Challenge 8. The Inconsequential Gains and Lasting Insecurities of India’s Nuclear Weaponization 9. Follow the Yellowcake Road: Balancing Australia’s Security, Commercial and Bilateral National Interests against International Anti-Nuclear Interests 10. Capping North Korea’s Weapons and Iran’s Capability  PART THREE: THE NUCLEAR REGIME 11. Stepping Stones to a Nuclear-Weapon-Free World 12. NPT Regime Change: Has the Good Become the Enemy of the Best? 13. The Global Governance Architecture of Nuclear Security 14. The Problem of Nuclear Weapons and What To Do About It

Ramesh Thakur is Director of the Centre for Nuclear Non-Proliferation and Disarmament in the Crawford School of Public Policy, The Australian National University. A former United Nations Assistant Secretary-General, he is the author/editor of 50 books and 400 journal articles and book chapters, including, most recently, The Group of Twenty (G20) (Routledge, 2013); Nuclear Weapons: The State of Play (2013); and The Oxford Handbook of Modern Diplomacy (2013); and the Editor-in-Chief of Global Governance.

'Ramesh Thakur is the most comprehensive thinker on nuclear disarmament active today. Nuanced and sensitive to the underlying security dilemmas and political forces, his perspective elevates disarmament beyond familiar cliches, placing it at the core of security policy. His work should be part of any discussion of disarmament imperatives and prospects.' ---Aaron Karp, Old Dominion University

'Ramesh Thakur is one of the few internationally renowned authors who has written on nuclear weapon issues in a coherent, consistent and cogent manner so that the most complex issues are presented to both the academic and the general reader objectively and lucidly...this is an indispensable volume for students, diplomats and the general reader as a framework of reference on one of most vital issue of our times' --- Jayantha Dhanapala, former UN Under-Secretary-General for Disarmament Affairs 1998–2003

'This essay collection consolidates Ramesh Thakur's reputation as one of the most knowledgeable and eloquent world authorities on nuclear weapons issues, showcasing nearly 30 years of outstanding scholarship and addressing some of the most serious challenges that have confronted the nuclear non-proliferation regime. It will appeal to any reader seeking a lively, balanced and well-informed analysis of the nuclear past, and concerned – as we all must be – for the nuclear future' --- Gareth Evans, Convenor, Asia Pacific Leadership Network (APLN) and Co-Chair, International Commission (ICNND) on Nuclear Non-Proliferation and Disarmament

‘From his perch at universities in Australia, Canada and New Zealand, and with the United Nations in Tokyo, Ramesh Thakur has been thinking and writing on nuclear arms control and disarmament for close to three decades. There will be few better guides to the topic, especially as it shapes Asia’s geopolitics. His deep learning and key insights are channelled into the commitment to eliminate the scourge of nuclear weapons from the world. Few nuclear-armed countries are spared critical scrutiny. A rare and welcome blend of analysis and advocacy, scholarship and policy, and realism and vision’ -- Kishore Mahbubani, National University of Singapore, Singapore

'Ramesh Thakur has written extensively on issues of nuclear disarmament and arms control. In these collected essays, the first from 1986 and the latest from 2014, he sustains a consistent voice, eloquent and extremely well informed.'--Lawrence Freedman, International Affairs, January 2016

'Ramesh Thakur is a leading expert on nuclear weapons … all readers will benefit from a careful examination of the rigorous argumentation that characterizes this volume.' -- Scott Wisor, Global Governance, January 2016