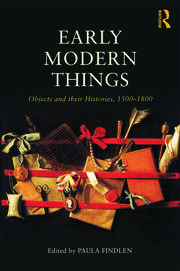 What can we learn about the past by studying things? How does the meaning of things, and our relationship to them, change over time? This fascinating collection taps a rich vein of recent scholarship to explore a variety of approaches to the material culture of the early modern world (c.1500-1800).

Divided into six parts this book explores; the ambiguity of things, representing things, making things, empires of things, consuming things and lastly the power of things. Spanning across the early modern world, from Ming dynasty China to Georgian England, and from Ottoman Egypt to Spanish America, the authors provide a generous set of examples in how to study the circulation, use, consumption and, most fundamentally, the nature of things themselves.

Drawing on a broad range of disciplinary perspectives and lavishly illustrated, Early Modern Things supplies fresh and provocative insights into how objects – ordinary and extraordinary, secular and sacred, natural and man-made – came to define some of the key developments of the early modern world. This book will be essential reading for all those interested in the early modern world.

Paula Findlen is Ubaldo Pierrotti Professor of Italian History and Co-Director of the Center for Medieval and Early Modern Studies at Stanford University, USA. Her previous works include Possessing Nature: Museums, Collecting and Scientific Culture in Early Modern Italy, which was awarded the Pfizer Prize in the History of Science, and (co-edited with Pamela Smith) Merchants and Marvels: Commerce, Science and Art in Early Modern Europe.

"A cornucopia: a rich and valuable collection that ranges far and wide in its analysis of the dynamic and diverse powers – symbolic, material, economic, political and religious – of things in the early-modern world, and of the important questions that taking objects seriously raise for the historian of any era." - John Brewer, California Institute of Technology, USA

"Early Modern Things: Objects and their Histories, 1500–1800 is a collection of 17 essays edited by Findlen, which explores what we can learn about the early modern world by studying its things and their meanings and how these change over time, from culture to culture and across geographic locations… for students and scholars interested in a multi-disciplinary approach to the early modern world of material culture, the book will serve as a valuable reference work." - Victoria Jackson

"[This book’s] accessible, lively and brief contributions…will make it a valuable resource for students and scholars alike." -E.C. Spary. University of Cambridge, UK

"In Early Modern Things: Objects and Their Histories, 1500–1800, the editor takes up the post-1492 world of traditional divisions and new contacts and here broadens the scope of investigation in time to the Dutch golden age, seventeenth-century Florence, and eighteenth-century Amsterdam(among other settings) and also beyond Europe, to include China, Tokugawa Japan, and the Ottoman Empire. Findlen’s volume provides a valuable overview of the state of studies in the field, utilizing literary sources, art history, and the history of science, medicine, and technology."
Carole Collier Frick, Southern Illinois University Edwardsville in The Journal of Modern History