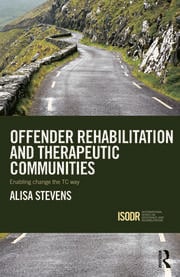 Offender rehabilitation has become increasingly and almost exclusively associated with structured cognitive-behavioural programmes. For fifty years, however, a small number of English prisons have promoted an alternative method of rehabilitation: the democratic therapeutic community (TC). These prisons offer long-term prisoners convicted of serious offences the opportunity to undertake group psychotherapy within an overtly supportive and esteem-enhancing living environment.

Drawing upon original research conducted with ‘residents’ (prisoners) and staff at three TC prisons, Offender Rehabilitation and Therapeutic Communities provides a uniquely evocative and engaging portrayal of the TC regime. Individual chapters focus on residents’ adaptation to ‘the TC way’ of rehabilitation and imprisonment; the development of caring relationships between community members; residents’ contributions towards the safe and efficient running of their community; and the greater assimilation of sexual offenders within TCs for men, made possible in part by a lessening in ‘hypermasculinity’.

By analyzing residents’ own accounts of ‘desistance in process’ in the TC, this book argues that TCs help offenders to change by enabling positive developments to their personal identity and self-narratives: to the ways in which they see themselves and their life. The radically ‘different’ penal environment allows its residents to become someone ‘different’.

Alisa Stevens is Lecturer in Criminal Justice Studies at the University of Kent. Her main areas of research interest are the correctional services (prisons and probation), offender rehabilitation, and desistance from crime.

'This scholarly, insightful and often-compelling study of therapeutic communities (TCs) makes a significant contribution to the ongoing resurgence in ethnographic studies of the modern prison …Each chapter is built on the qualitative data Alisa Stevens generated during her fieldwork which she discusses in an excellent, seventh chapter on conducting research in prisons. Deploying these data throughout the text adds an eloquence, depth and poignancy to the central core of the book’s focus, namely the processes involved in individual change and the drive of those in the TCs to reach a different, positive psychological space that will lead to them desisting from crime …The book offers a powerful challenge to the reductive positivism so intrinsic to state and media constructions of the risk-laden, unchangeable, abnormal other. It also challenges the pessimistic self-serving mindset of policy makers and politicians who endlessly pontificate about academic work contributing little that is positive to the policy process or rather to their already-defined policy process. For these reasons, it deserves to be widely read as it points towards a different path that inevitably leads to alternative, more empowering, outcomes for the confined while lessening the chances of further victimization.' – Joe Sim, British Journal of Criminology, September 2014

'This is a beautifully written, detailed and sensitive ethnography of an unfashionable corner of the prison estate in England and Wales. Moreover, it is an approach that has survived many critical onslaughts and that in itself suggests that there is something worth preserving and celebrating here.  Stevens’ research will undoubtedly contribute to that process, reminding the older generation of criminologists and criminal justice practitioners of why we were inspired by TCs and bringing that inspiration to a new generation of students and practitioners.' – Anne Worrall, Criminal Law and Criminal Justice Books, May 2013.

'Alisa Stevens has written a captivating research monograph, in which she vividly describes the culture of therapeutic communities and how residents work towards a crime-free future ... Stevens has made a unique contribution to the desistance literature by analysing desistance as it is taking place rather than retrospectively trying to understand why ex-offenders ceased to commit crimes ... [Offender Rehabilitation and Therapeutic Communities] is a pleasure to read. The book will be informative for prison and desistance researchers and anyone with a stake in imprisonment policy ... [and] gives the reader an excellent insight into the penal counter-culture of TCs, where the rehabilitative ethos trumps punishment.' – Esther van Ginneken, Cambridge University, Criminology and Criminal Justice 2013 13: 474.