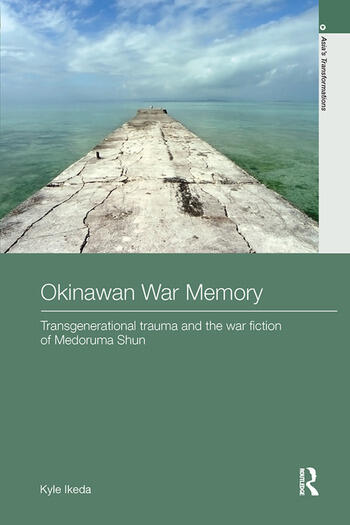 As one of Okinawa's most insightful writers and social critics, Medoruma Shun has highlighted the problems and limits of conventional representation of the Battle of Okinawa, raised new questions and concerns about the nature of Okinawan war memory, and expanded the possibilities of representing war through his groundbreaking and prize-winning fiction, editorials, essays, and speaking engagements. Yet, his writing has not been analyzed in regard to how his experience and identity as the child of two survivors of the Battle of Okinawa have powerfully shaped his understanding of the war and his literary craft.

This book examines Okinawan war memory through the lens of Medoruma’s war fiction, and pays particular attention to the issues of second-generation war survivorship and transgenerational trauma. It explores how his texts contribute to knowledge about the war and its ongoing effects — on survivors, their offspring, and the larger community — in different ways from that of other modes of representation, such as survivor testimony, historical narrative, and realistic fiction. These dominant means of memory making have played a major role in shaping the various discourses about the war and the Battle of Okinawa, yet these forms of public memory and knowledge often exclude or avoid more personal, emotional, and traumatic experiences. Indeed, Ikeda’s analysis sheds light on the nature of trauma on survivors and their children who continue to inhabit sites of the traumatic past, and in turn makes an important contribution to studies on trauma and second-generation survivor experiences.

Introduction: Transgenerational War Memory in Okinawa Part I: Simmering Awareness 1. Unarticulated Memory and Traumatic Recall in The Crying Wind and Walking the Street Named Peace Boulevard Part II: Vicarious Imagination and the 'Magical Real' 2. Unrecognized Signs and Unexplained Phenomena in Droplets 3. Subjective and Objective Fiction: Medoruma's Spirit Stuffing and Ōshiro’s Island of the Gods Part III: Portraying Second-Generation Conscious Engagement 4. Critical "Sentimentalism" and Conscious Engagement in Tree of Butterflies 5. Multi-Sensory Memory and Sites of Trauma in Forest at the Back of My Eye 6. Epilogue

Kyle Ikeda is an Assistant Professor of Japanese Literature at the University of Vermont, USA.

"Through  a  judicious  use  of  key  concepts  on  transgenerational trauma gleaned from Holocaust studies Ikeda succeeds in showing how Medoruma, a second-generation  war survivor, can write  about war experience that he, born fifteen years after the end of the war,  lacks. Although this is a tremendous achievement that underscores the power of Medoruma's literary  imagination, to state that a  writer without first hand experience can create compelling war  fiction is not nearly as important as the convincing reasons Ikeda provides readers for why  Medoruma writes the war fiction for which he is widely acclaimed."