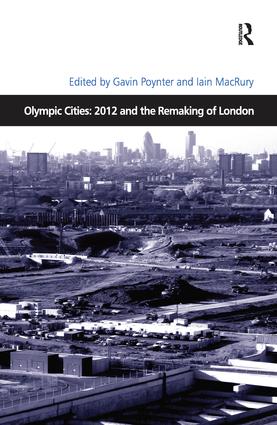 Olympic Cities: 2012 and the Remaking of London

Drawing upon historical, cultural, economic and socio-demographic perspectives, this book examines the role of a sporting mega-event in promoting urban regeneration and social renewal. Comparing cities that have or will be hosting the event, it explores the political economy of the games and the changing role of the state in creating post-industrial metropolitan spaces. It evaluates the changing perceptions of the Olympic Games and the role of sport in the global media age in general and assesses the implication of 'mega-event' regeneration policies for local communities and their cultural, social and economic identities, with specific reference to east London and the Thames Gateway.

'The book presents a refreshing perspective on the games, not concentrating on either sporting success or nationalistic triumph. Thoroughly recommended as a good read, setting the Olympic Movement into a true global context.' Building Engineer 'London 2012 returned from China last summer impressed but undaunted by our experience of the Beijing Games. This book provokes the same reaction. For those with an interest in, or responsibility for, London's legacy planning there is much here with which to agree and some perspectives with which to disagree, but the contributions are never less than thoughtful, thought-provoking and challenging.' Tom Russell, Group Director Olympic Legacy, London Development Agency, UK ’…a provocative work…Recommended.’ Choice '…an excellent resource for anyone trying to understand how and why we got to where we are today in east London and the regeneration potential of a successful games in 2012.' New Start 'Social and economic regeneration, the strengthening of a sense of community, combating obesity… the number of objectives with which a fortnight's worth of running, rowing and throwing has been freighted is mind-boggling. It all raises a number of important questions. Enter Olympic Cities: 2012 and the Remaking of London, a fascinating collection of essays…it represents one of the best attempts yet to make sense of the role and meaning of the modern Olympic Games - that is, to situate their significance in the economic, political and cultural context of the host cities and nations.' Sp!ked

Professor Gavin Poynter and Dr Iain MacRury are both in the School of Social Sciences and Media and Cultural Studies at the University of East London, UK

Design and the Built Environment

Design and the Built Environment

This series provides a means to disseminate more substantive urban and environmental design research. Specifically, contributions will be welcomed which are the result of original empirical research, scholarly evaluation, reflection on the practice and the process of urban design, and critical analysis of particular aspects of the built environment. Volumes should be of international interest and may reflect theory and practice from across one or more of the spatial scales over which urban design operates, from environmental and spatial design of settlements, to a concern with large areas of towns and cities - districts or quarters, to consideration of individual developments, urban spaces and networks of spaces, to the contribution of architecture in the urban realm.