On Moving and Being Moved
Nonverbal Behavior in Clinical Practice 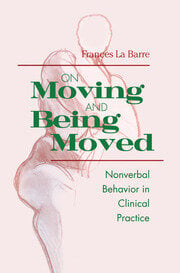 On Moving and Being Moved: Nonverbal Behavior in Clinical Practice

Every sensitive therapist intuits the wealth of meaning that resides in nonverbal behavior. Yet, trained as they are to discern and communicate verbal insights, few therapists have a clear idea of how to tap that stream of meaning. In On Moving and Being Moved, Frances La Barre remedies this situation in an intellectually broadening and clinically exciting manner. Drawing on an extensive research literature on movement and nonverbal behavior, her background as a dancer, and her extensive analytic experience, she seeks to enhance our perception of movement and our understanding of its role in therapeutic communication.

La Barre anchors her contribution in a thorough-going review of both analytic and nonanalytic sources as they bear on clinical issues. Conversant with the language of posture-gesture mergers, of kines and context analysis, and of body attitudes and self-directed touching, she spans the research literatures of all relevant disciplines, from anthropology to developmental psychology to ethology, from studies of temperament to cross-cultural comparisons of interactive rhythms. Turning to the psychoanalytic domain, she begins by considering the traditionally peripheral role of the body that derived from Freud's own belief that action was often an obstacle to verbal understanding.  With the advent of the contemporary relational perspective, she holds, the stage is set for a deeper understanding of nonverbal behavior both as a source of meaning and as a ubiquitous shaper of therapeutic communication.

For the clinician, On Moving and Being Moved is a wonderfully informative introduction to the realm of the nonverbal that succeeds both as a reference work and as a pivotal contribution to the theory of therapy.  La Barre goes on to illuminate the manner in which analytic and nonanalytic insights can be integrated into a flexible yet disciplined approach that restores nonverbal behavior to its rightful place in the "talking cure."

I. The Choreography of Conversation
- Language and Nonverbal Behavior
- Talking and Acting
- Attunement
- Temperament, Interaction, and Self
II. Psychoanalytic Theory: The Setting of the Unseen Scene
- The Body
- Interaction, The Patient's Action
- Interaction, The Analyst's Action
III. The Logic of Action: Studies of Nonverbal Behavior
- The Intrinsic-Meaning Position
- The Cultural School
- The School of Practical Analysis
- Toward Complementarity
IV. The Logical of Action in the Clinical Setting
- The Matching and Clashing of Temperament
- "Drive" as an Aspect of Interaction
- Body Attitude and Countertransferential Experience
- The Interactive Effect and Meaning of Speech Rhythms
Conclusion

Frances La Barre, Ph.D., is faculty and supervisor at the Psychoanalytic Psychotherapy Study Center and the Institute for Contemporary Psychotherapy, as well as adjunct professor of psychology in the graduate department of Pace University. She maintains a private practice in New York City with individual adults, children, parents and infants, and couples.

"On Moving and Being Moved engages theorist and clinician in an invigorating examination of the 'choreography' created by both participants in the analytic process. La Barre skillfully and gracefully escorts the reader on a scholarly tour of the meaning of action within the psychoanalytic tradition and within a research literature on nonverbal behavior unfamiliar to most clinicians. Her integration of these two domains is topical, masterful, and unprecedented. Readers will find her discussion of topics such as gesture, posture, tempo, rhythm, and temperament invaluable. Her ample clinical illustrations will make an indelible impression on practitioners at all levels of experience, convincing them of the salience and mutual influence of nonverbal behavior in the therapeutic dyad."

"In On Moving and Being Moved Frances La Barre tackles the profoundly important and long-neglected issue of how mind and body constitute an inseparable unity within the analytic setting. She brings to center stage the power of what is expressed not only verbally but also in action, and in and through our bodies (both patient's and analyst's). Her book is a wakeup call to analytic therapists to pay attention to the choreography of the delicate dialogical interplay that goes on at this level between patient and analyst. Reading the book changes how we look at the patient's and analyst's bodily experiences and at the reciprocal interplay between the two that is always occurring in analytic work. La Barre's scholarly exploration of how these issues have been dealt with (or ignored) by different analysts and in the diverse research literature on nonverbal behavior is a valuable contribution in and of itself."

"La Barre reveals herself as an extraordinarily sensitive clinician with respect to paraverbal and nonverbal communication.  She relates in unparalleled detail the rhythmicities, synchronies, postural mirrorings, and counterkinesic responses responsible for different therapeutic duets...Readers of this book will enlarge their awareness of subtleties in nonverbal behavior, and will become convinced that well-rounded analysts need, as the author states, a developed 'eye' and kinesthetic sense, as well as an 'ear.'"

"Frances La Barre has made an impressive contribution to our understanding of the dynamics of the patient-therapist relationship. Her masterful integration of research on nonverbal behavior, psychoanalytic thought, and clinical practice will open the eyes of any psychotherapist to a rich layer of meaning that too often goes untapped. After reading On Moving and Being Moved, the silent dance of the therapy session will never look the same again."