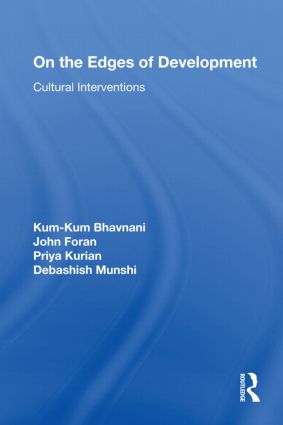 On the Edges of Development

Big business, financial institutions, and capitalist powers have wreaked much havoc on the Third World in the name of development. This book re-imagines development through a careful and imaginative exploration of some of the many ways that culture – in the broadest sense of lived experience and its representation – can recenter resistance, suggest alternative models, and advance critiques of development as it is currently practiced. The diverse group of scholars and activists who contribute chapters to the volume engage with the puzzle of how best to conceptualize an alternative development that improves the living conditions of women and men in different parts of the world and simultaneously demands solutions that focus on the integration of gender, diversity, and development with the realities of people’s lives.

Kum-Kum Bhavnani is Professor of Sociology and Director of the program in Women, Culture, and Development at the University of California, Santa Barbara.

John Foran is Professor of Sociology at the University of California, Santa Barbara.

Priya Kurian teaches environmental politics and media and politics at the University of Waikato, New Zealand.

Routledge Studies in Development and Society