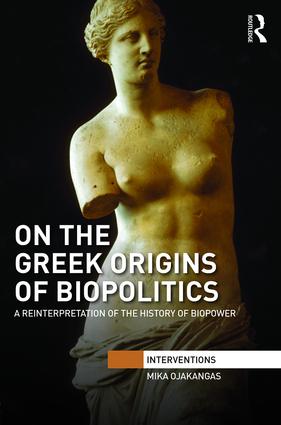 On the Greek Origins of Biopolitics

A Reinterpretation of the History of Biopower, 1st Edition

This book explores the origins of western biopolitics in ancient Greek political thought. Ojakangas’s argues that the conception of politics as the regulation of the quantity and quality of population in the name of the security and happiness of the state and its inhabitants is as old as the western political thought itself: the politico-philosophical categories of classical thought, particularly those of Plato and Aristotle, were already biopolitical categories. In their books on politics, Plato and Aristotle do not only deal with all the central topics of biopolitics from the political point of view, but for them these topics are the very keystone of politics and the art of government.

Yet although the Western understanding of politics was already biopolitical in classical Greece, the book does not argue that the history of biopolitics would constitute a continuum from antiquity to the twentieth century. Instead Ojakangas argues that the birth of Christianity entailed a crisis of the classical biopolitical rationality, as the majority of classical biopolitical themes concerning the government of men and populations faded away or were outright rejected. It was not until the renaissance of the classical culture and literature – including the translation of Plato’s and Aristotles political works into Latin – that biopolitics became topical again in the West.

7. Decline of Biopolitics in Late Antiquity

8. Rebirth of Biopolitics in Medieval and Early Modern Europe

Mika Ojakangas is Professor of Political Thought, Rhetoric and Culture in the Department of Social Sciences and Philosophy at the University of Jyväskylä, Finland.