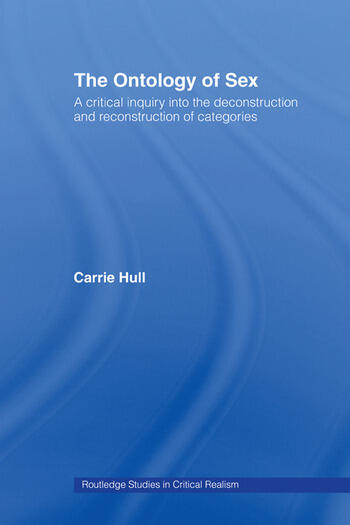 Poststructuralism, particularly through the writings of Michel Foucault and Judith Butler, has achieved remarkable success in challenging our belief in natural sex categories and instincts. Here, Carrie Hull endorses the progressive ideals of poststructuralism while demonstrating the superiority of a realist account of sex and sexuality. Embracing biological and cultural variability, Hull nonetheless shows that the sexed body is naturally structured and deeply meaningful.

Poststructuralist philosophers have argued that biological sex is a continuum rather than a binary, and that sex identity and drive are entirely performances of cultural norms rather than expressions of innate qualities. Hull draws parallels with Nelson Goodman, W.V.O. Quine, and B.F. Skinner to show that these poststructuralist theories are rooted in a nominalist, relativist, and behaviourist philosophy, and develops an alternative framework using arguments from contemporary and critical realism.

Employing colourful illustrations from biology, anthropology and psychology, Hull demonstrates the rich potential of realist philosophy, and concludes that it is philosophically and scientifically correct, on one hand, and politically advisable, on the other, to maintain a distinction - albeit attenuated - between sex and gender, and sexuality and behaviour.

Carrie Hull has taught at Wilfrid Laurier University and the University of Toronto, Canada. Her previous publications have appeared in Philosophy and Social Criticism, Radical Philosophy, New Political Science, and Environmental Values