Open Government in a Theoretical and Practical Context 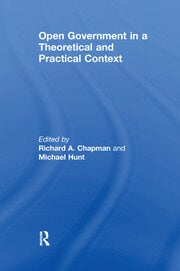 Open Government in a Theoretical and Practical Context

Combining a stimulating blend of academic authority and senior practitioner experience, this book tackles the principle of openness to official documentation and information flow. It covers important areas such as the Hutton Report into the death of Dr David Kelly, the freedom of speech in democratic societies, the value of the freedom of information and international comparisons. The book is a must read for courses on public policy and governance and information law.

'The Freedom of Information Act brings specific benefits to a wide range of people in the access it provides to information, and has the potential to bring about far-reaching change in the practice of government. This book raises fascinating questions about why it was enacted, whether it will achieve its potential, and whether the more unwilling elements in politics and the bureaucracies have a significant capacity to resist the process of change...worthwhile reading.' Rt Hon. Alan Beith, MP 'From a forensic examination of the Hutton report to citizenship in an electronic age, this important book addresses one of the most pressing issues of modern democracy. A set of superb essays, from practitioners as well as academics, provides fresh insights on the way we are governed.' John Kingdom, formerly at Sheffield Hallam University, UK 'Open Government in a Theoretical and Practical Context is recommended for its thought-provoking analysis of the early days of the FOI era.' Open Government 'The collection is remarkable for its consistent focus on the practicality of progress and for understanding that effective government means a certain degree of secrecy. The authors are also sensitive to the role that cuture plays in government and politics...The chapters are also refreshingly critical in their treatment of the public for its increasing lack of engagement, a trend that could be reversed should this book's reasoned optimism find its way from academic circles to the public square.' Political Studies Review 'A major strength of the book is that the complex and politically charged arguments that exist in this area are addressed through a consideration of the actual practice of government itself...[the book] contains a great deal to think about and, for teachers of public administration, it provides scope for numerous essay titles, practical exercises and exam questions. On both counts it is to be thoroughly welcomed and highly recommended.' Teaching Public Adminis