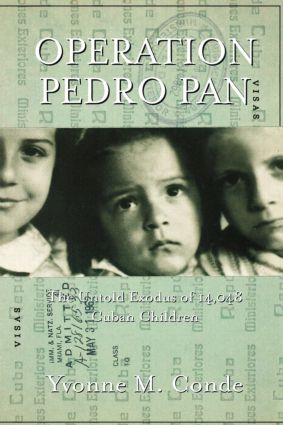 "[Conde] does an impressive job of reporting dozens of personal stories and fascinating vignettes…a compilation of tales, some moving, many astonishing." -- Chicago Tribune

"A moving and fascinating tale about the painful passage to liberty of thousands of Cuban children spirited out of their country in ingenious fashion by families who chose separation over repression. With Operation Pedro Pan, Conde has added another chapter to the long saga of the American struggle for freedom--with the youngest of characters as her heroes. Bravo!" -- Alex Abella, The Killing of the Saints

"A collection of tearful testimonies woven with a tale of the event that unfolded in Cuba, and led desperate parents to make the heart-wrenching decision to send their children alone to a foreign country."

"Fascinating is the least one can say about this book. It's the story of thousands of Cuban Children who wouldn't grow up under communism and were sent by their parents to the Never Never Land of America. Some of them lived happily ever after because this version of Peter Pan is a tragedy with a happy ending sometimes. Fidel Castro, by the way, plays a very credible Captain Hook." -- Guillermo Cabrera Infante

Yvonne M. Conde is a freelance writer in New York City. She has written for Latina Magazine, Crains, Smithsonian, and Hispanic Business Magazine, among others and she has been featured on MSNBC, Fox News Channel and NPR.