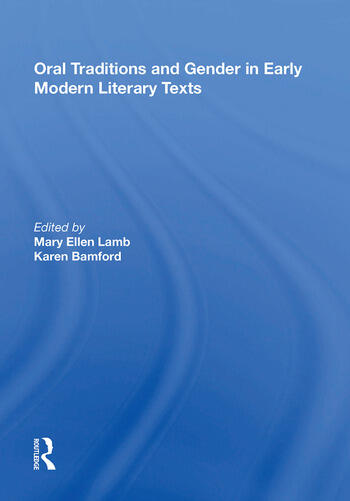 Proposing a fresh approach to scholarship on the topic, this volume explores the cultural meanings, especially the gendered meanings, of material associated with oral traditions. The collection is divided into three sections. Part One investigates the evocations of the 'old nurse' as storyteller so prominent in early modern fictions. The essays in Part Two investigate women's fashioning of oral traditions to serve their own purposes. The third section disturbs the exclusive associations between the feminine and oral traditions to discover implications for masculinity, as well. Contributors explore the plays of Shakespeare and writings of Spenser, Sidney, Wroth and the Cavendishes, as well as works by less well known or even unknown authors. Framed by an introduction by Mary Ellen Lamb and an afterword by Pamela Allen Brown, these essays make several important interventions in scholarship in the field. They demonstrate the continuing cultural importance of an oral tradition of tales and ballads, even if sometimes circulated in manuscript and printed forms. Rather than in its mode of transmission, contributors posit that the continuing significance of this oral tradition lies instead in the mode of consumption (the immediacy of the interaction of the participants). Oral Traditions and Gender in Early Modern Literary Texts confirms the power of oral traditions to shape and also to unsettle concepts of the masculine as well as of the feminine. This collection usefully complicates any easy assumptions about associations of oral traditions with gender.